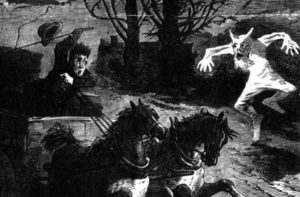 In 1871 and 1872, there was a series of ghost scares in Peckham, south London, and its vicinity. In November and December 1871, a ‘ghost’ had been breaking windows at night, but this vandalism ceased after the arrest of a ‘foreigner’ with a catapult.

In April and May 1872, there was another window-breaking epidemic, which was blamed on a 13-year-old girl named Nott, who was caught red-handed and severely fined the month after.

On October the same year, there were several sightings of a figure dressed in white, who prowled the Peckham lanes, frightening women by making spooky noises, or grabbing them from behind.

Quite a few people saw the ghost, which was described as very tall, between six and eight feet depending on the witnesses’ level of intoxication, and with a most forbidding countenance. Some accredited the ghost with horns, others were certain it had luminous breath; yet others believed it had boots fitted with springs, enabling it to leap like Spring-heeled Jack.

The ghost screamed and gibbered in a weird, penetrating voice; it jumped high fences, and ran at near-superhuman speed. In early November, the two daughters of Dr Carver, headmaster of Dulwich College, were so badly frightened by the ghost that several days later the youngest had not fully recovered.

A vigilante Anti-Ghost Fund was established, and the ghost was burnt in effigy by the local inhabitants. Nevertheless, there were several new sightings of the figure in white, and many reports of windows being broken.

Some people were convinced they were dealing with a proper ghost; many believed some prankster was at work; some rationalists thought it was just a case of mass hysteria.

On 27 November, a lad named Arthur Ridgway was carrying home a stone flask containing half a gallon of beer. A figure dressed in dark clothes sneaked up to him, spread his arms to reveal a white suit, and uttered “some dismal cries”.

Terrif­ied, Ridgway dropped his beer and ran home. The very same evening, 13-year-old Matilda Ayers was also confronted by the ghost: he spread his arms, uttered some strange sounds, and greatly alarmed her.

There was quite an outcry in Peckham, with people milling about looking for the ghost. A group of workmen turned vigilante decided to catch the man frightening the children. They saw an odd-looking cove nearby, throwing peas at the shutt­ers of a house just like the ghost was supposed to have done.

They pursued him to a house, where he was later taken into custody by a police constable. The suspect turned out to be the homeless, unemployed Joseph Munday, described as a singular-looking man wearing a large curly wig.

A number of peas were found in his pockets; he said he had bought them to eat. He had no explanation for the strange garb he was wearing, with “a white slop” inside a dark cloak.

The lad Ridgway and the girl Ayers both identified him as the ‘ghost’ they had seen, and since the destitute Munday was unable to find bail, he was sentenced to six months in jail.

When Munday was carted off to prison on 7 December, calm was restored to Peckham and its environs. But 10 days later, a man named James Sanson, driving a cart outside Bury, Lancashire, very far from Peckham, was dismayed to see a tall, white figure approaching his vehicle.

According to the Illustrated Police News, the ghost “twisted itself about and performed a number of antics fearful to witness; it shrieked and gibbered at once discordant and appalling”.

Although Sanson whipped up his horses, the ghost kept up with him for several minutes, before it disappeared with a final wild shriek. Was this the original Peckham Ghost, or ghost impersonator, enjoying another of his pranks after finding Peckham too hot for him following the arrest of the copycat Munday?