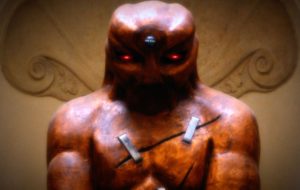 Did humanoid robots exist in the ancient Greece? Are the accounts of them purely fictional? Can they be the distant echoes of some events that took place at the dawn of modern humankind? We will not jump to conclusions. Pravdareport.com take a closer look at the ancient mythology from the point of view of historical retrospective.

Legend has it that Hephaestus, the ancient Greek god of fire, metalworking and handicrafts, “forged” two dozen copper tripods, which could move about the place “on the golden wheels” as if they were self-propelled (or automatic?).

The devices are said to have been used for rendering services to gods who visited Hephaestus. Could they be some kind of a remote-controlled robot or automatic means of transporting?

Hephaestus had a limp, and therefore he also “forged” two maids who were made of gold.

Those maids were “strong, sensible and could express themselves in words.” They supported Hephaestus by the hand while accompanying him during outings, waited on him, and amused him with their singing. They “were in possession of every piece of knowledge taught by the immortal gods,” according to Homer’s Iliad.

Another Greek myth says about the “copper giant” named Thalos, which was also made by Hephaestus. Zeus ordained that the giant should defend the island of Crete. Thalos had an all-metal body topped with a horned head.

There was a single artery running from top to toe of his body. The artery was plugged with a “copper nail.” The copper giant patrolled the island, and kept the enemy ships at bay by throwing rocks at them. He was also a mouthpiece of Minos, a king of Crete.

Thalos began throwing “red flame” around him after the enemy invaded Crete. Thalos managed to send the enemies running. However, the sorceress Medea outsmarted the giant with the help of “false visions.”

Then she took the plug out of the artery, and the giant’s black oily blood came rushing onto the ground. As a result, Thalos’s strength thinned out. Crete became extremely vulnerable to enemy attacks.

In terms of technology, the following analogies fall into place if we see the story of Thalos through the eyes of a twenty-first-century man: the “black oily blood” may be fuel or lube oil in a hydraulic system; the “false visions” may refer to a guided radar jamming designed to interfere with the robot’s program; and a “horned head” may allude to radar antennas.

It is interesting that we can find a similar description of a robot in the story of Chi Yu, the fabulous creature of ancient China. It had four eyes, six arms (manipulators?), some tridents in place of ears.

To a certain extent, those three-pronged tools resemble Thalos’s radar antennas. Chi Yu was capable of moving along the broken terrain. It could also take off the ground for a brief period of time. The creature “fed” on rocks, sand, and even iron.

The locals buried the head of the creature in a cave after Chi Yu “passed away.” For a long while the locals would come to the cave and worship the head. A cloud of steam glowing red would rise from the grave from time to time. The reference to that cloud is the most interesting “technical detail.”

Supposedly, Chi Yu “fed on rocks, sand, and even iron” for transforming the above materials into atomic energy, thus the uncontrolled emissions may have been interpreted by the observers as the cloud mentioned above.

The story about a “dragon” of Huang Ti, the legendary first emperor of China, stands out in the legends of ancient China.

The legend says that the “dragon” had a pair of wings, and its body shone the color of metal. It is quite odd that the flights of the “dragon” depended on weather conditions. One day the Huang Ti climbed “aboard” the creature yet the latter failed to take off due to hurricane – a really strange circumstance since the fabulous dragons were the protectors of rain and wind.

The above “anomaly” can be understood once we assume that the “dragon” stands for a prototype of some flying machine. According to the legend, the “dragon” could hold up to 70 passengers who boarded it by climbing on its “whiskers.” The “dragon” may as well refer to a helicopter equipped with a movable gangway.

Now let us get back to Greek mythology. The dragon featured in the legend of the Golden Fleece set in Colchis is of particular interest. The dragon stood guard over the Golden Fleece in a grove belonging to Ares, the ancient Greek king of war. The “monster” had an armored body covered with copper scales, and its sinister eyes shone brightly. There were three rows of teeth in its mouth, and a golden comb heaving on top of its head.

Again, we can offer a number of modern technical terms to suit the above attributes of the legendary dragon: “the shining eyes” may refer to searchlights or headlights; “the three rows of teeth” may refer to a system of gear wheels, and “the golden comb” may stand for a locater or antenna. The dragon as a whole may be a description of some “technological miracle” rendered by a man of the Bronze Age.

We can use a number of references to back the above interpretation of the account. First, it took a sort of “hypnotic action” for putting the “dragon” to sleep. Bearing in mind the other case when Medea successfully turns the copper giant Thalos into a useless waste of space by casting some rays into his “horned head,” the act of hypnosis may have to do with a guided jamming session.

The dragon was subdued by the magic powers of “hypnosis”, which made it “shut its mouth, close its fiery eyes, and stretch itself out under the tree, on which the Golden Fleece hung.” In other words, Medea did the same trick one more time by emitting confusing impulses designed to disrupt the vital functions of the monster.

The Greek mythology even has the account of an air battle featuring the Harpies (Harpy is a ravenous, filthy monster having a woman’s head and a bird’s body) and Boreads (Boread is a winged son of Boreas, personification of the northern wind in Greek mythology).

The account specifically mentions a horrid smell of the Harpies. It perhaps refers to the general attitude of the ancient people toward the smell of fuel. It is quite understood since the ancients were more accustomed to smelling the fresh breeze. Quite a few people of today’s age of technology still find the smell of motor gasoline or aviation gasoline repulsive.

The myth of the Argonauts contains a description of big Stymphalian birds, a flock of predacious birds of Arcadia. They had large and shining copper wings, which threw pointed feathers (a variety of arrows or bullets?) at the Argonauts.

The latter managed to shoot down one of the birds. Then the birds circled over Jason’s ship, and faded away on the horizon. The maneuver seems to resemble that of a group of war planes performed out on patrol or following an attack on a ground target.

According to the myth of the search for the Golden Fleece, during one of his labors Jason was told to plow the field “dedicated to Ares” using a couple of “oxen having copper-plated legs and mouths that breathe out fire.” And two roaring oxen appeared and charged the hero vehemently, or so the story goes. The oxen began spouting fire. However, Jason managed put them under restraint and did as he told.

What hides beneath the description of those strange oxen? The copper-legged oxen that spout fire look very much like some mechanisms capable of moving about independently.

Taking into account the reference to the use of creatures in agriculture, not to mention the presence of copper “parts” and “great flames thrown out their mouths”, we might as well arrive at certain points of similarity between the legendary oxen and present-day tractors.