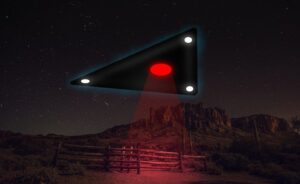 This is only part of the story and visual evidence pertaining to UFO / UAP incursions by Unknown Advanced Transmedium Vehicles (UATVs) – engaging US Navy warships.

On May 1st, 2020 a classified briefing was generated about the UFO / UAP presence, via the Office of Naval Intelligence (ONI).

“Those familiar with the briefing articulated to me that the goal was to de-stigmatize the UAP problem and to promote more intelligence collection regarding UAP incursions and encounters with active military deployments”, wrote Jeremy Corbell.

“This UAP briefing was a build-on to a previous ONI briefing, generated October 18th, 2019. Both were distributed across a wide range of intelligence network platforms”, he added.

Jeremy Corbell was able to obtain information regarding these and other UAP related briefings – as well as – unclassified slides and some of the most intriguing military captured UAP footage he has ever seen.

The context surrounding this content is important to understand – as its evidentiary value is best demonstrated through the lens of provenance.

We want you to understand why this new evidence is worth your full attention and ask yourself whether these UAPs are made on earth and piloted and controlled by humans or not.

Corbell claimed that the mysterious UFO clip was received from an anonymous person, and added that he has access to some information on an alleged intelligence briefing conducted by the Pentagon into Unidentified Aerial Phenomena (UAP).

Earlier, Ben Rich – Lockheed’s Skunk Works said: “We already have the means to travel among the stars, but these technologies are locked up in black projects and it would take an act of God to ever get them out to benefit humanity… anything you can imagine, we already know how to do… we now have the technology to take ET home.”