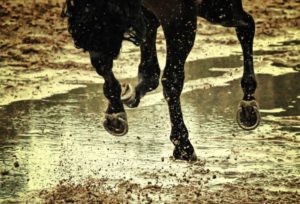 In the early 19th-century, there lived near Bath a young man by the name of Jesse Elliott. The free-spirited Elliott was a hard-drinking, profane man who — with several madcap companions — liked to race horses on Sunday.

Elliott would take on any challenger — at any time and any place. The young hoodlum was certain his own horse was the fastest animal in the county.

One quiet Sunday morning in August 1802, a dark stranger on a black horse approached Jesse Elliott down by the dock in Bath. The rider declared that Elliott’s stallion could be beaten, and wagered a hundred dollars on the proposition. Elliott’s confidence was unshaken: “I’ll meet you at the track in an hour,” he scoffed, and with that, Jesse hurried home to prepare for the coming race.

At home, Elliott pulled on his riding boots and knocked back two glasses of straight liquor. As he went to leave, Jesse’s wife cautioned the hot-headed rider about racing on Sunday. He merely cursed the frightened woman and stormed out of the house. As Elliott mounted his stallion and thundered away, his wife shouted a final warning: “I hope you’ll be sent to hell this very day!”

At the track near Bath, Elliott arrived to find the mysterious stranger waiting for him. The dark man was calm and earnest as the two riders agreed upon the terms of the race. Something about the stranger bothered Elliott, but he shook it off, eager to finish the race and take the man’s money.

In a flash, the race was on and both horses bounded down the lane. Jesse soon took the lead, and the dark rider slowly dropped back behind him. With growing confidence, Elliott shouted to his horse: “Take me in a winner or take me to hell!”

At that moment, as the stallion thundered around a curve in the track, Elliott’s horse suddenly twisted its head and shied. The beast reared and dug its hooves into the ground, and this violent movement sent Jesse Elliott sprawling from the saddle. The young hooligan was thrown against a large pine tree and killed instantly. There are those who still believe that Jesse Elliott went to hell that very moment, and that he was taken there by the stranger on the black horse. The dark rider quickly disappeared, and Jesse’s stallion was never seen again. The hoofprints that the horse left in the loamy soil, however, have remained visible in that spot for almost two hundred years.

As news of the tragedy spread, the local citizens took it as a solemn warning from on high, and Sabbath-breaking in the region diminished significantly.

The minister at St. Thomas Church in Bath, who had preached openly against the behavior of young ruffians in the area, declared that the hoofprints were left by “a man on his way to hell.” And legend says that the hoofprints endure as a reminder of the tragic fate that awaits all wild young sinners.

A few of Elliott’s companions, having gathered to watch the race, saw the accident unfold before their eyes. And the story has since been handed down to successive generations.

Today, about a mile west of Bath, the round shallow depressions in the ground — the infamous “hoofprints” — are as visible as ever. And there are certain qualities of these depressions that have baffled and mystified people for generations.

Though unsheltered, the holes remain free of grass, leaves, pine needles, or debris of any kind. And history has revealed that if the depressions are filled with earth — or anything else — they are always found to be empty and clean not long after. Within a few hours, the next morning, or sometimes the next week, the holes always come up empty after any attempt to fill them. 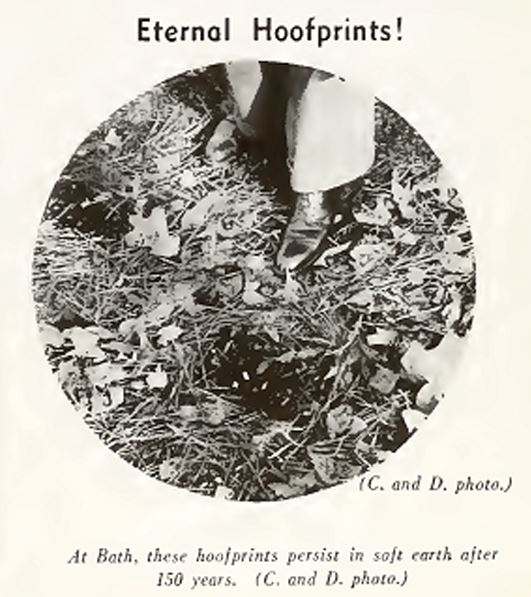 For many years, an old decayed stump of a pine tree was visible near the depressions — supposedly the rotting remnants of the tree that had figured in Jesse Elliott’s death.

Around the mid-20th-century, a newsreel cameraman named Earl Harrell arrived to get some pictures of these strange marks in the ground. He was told by local residents that chickens would eat corn from all around the holes, but that they would not touch any kernals that were actually in the depressions.

Harrell decided to film his own experiment with chickens and corn, and the result was the same. The birds ate all of the corn from around the holes, but ignored the feed lying within the holes themselves — even after the surrounding ground had been picked clean.

Intrigued, Harrell tried another experiment. He collected leaves, dirt, and stones, and filled each of the depressions. Harrell then constructed a network of black thread over the ground above the holes. When he came back the next morning, the net was undisturbed; but the holes were clean and clear. Nothing ever covers the tracks for long, according to the locals.

Through the years, these curious marks in the ground have been a subject of fascination for people of all ages. Children would fill the pits on their way to school, only to find them empty on their way home. J. S. Mann, a student at the University of North Carolina at Chapel Hill, heard the story of the tracks in 1881.

A Dr. Chopin, of Aurora in Beaufort County, told Mann at that time that he had seen and known of the tracks for fifty years previous. Mann later visited the hoofprints himself. And folks have been captivated by the phenomenon ever since.

Is there some natural explanation for the depressions in the ground, and for why they remain empty? Or were these marks left by a horse whose rider was on his way to hell?

The legend of the Mysterious Hoofprints at Bath is one of the most famous stories in North Carolina folklore. Of all the state’s tales of ghosts, spirits, and supernatural phenomena, the story of the hoofprints is one of the most enduring. And like most legends, it exists in many different versions and variations.

NOTE: The site of the hoofprint legend is on private property and is not accessible to the general public.