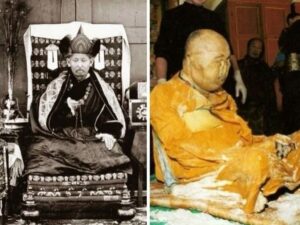 When bodies go through mummification they are expected not to show signs of decay. However, there are a few unsettling cases of dead people being exhumed only to find out their bodies looked as ‘fresh’ as the day they were interred.

Such is the case of Russian Buddhist monk Dashi-Dorzho Itigilov.

Born in the countryside of Buryatia, Itigilov’s parents left him at an early age, forcing him to pursue sheep-herding to make ends meet.

When he was 15, Itigilov joined the Anninsky Monastery, where he learned to read Tibetan and Sanskrit, enabling him to read Buddhist texts and serve in the Buddhist community.

After becoming the religious leader of Russian Buddhists, Itigilov raised money to provide food, clothing, and medical care to World War I soldiers, among other philanthropic acts.

He was a spiritual leader of Russian Buddhists from 1911 until his death in 1927.

Like many other notable Buddhists, especially the Buddha himself, Itigilov knew when he was ready to leave the world. In 1927, he gathered his students and told them his last wish – to have his body exhumed after 30 years.

Itigilov passed away, seated in a state of deep meditation. He was buried in a pine tree box sitting up in the lotus pose and, according to his wishes, his body was exhumed 30 years later.

He was exhumed in 1955 and again in 1973 and on both occasions the monks noticed his body had not decayed at all. However, they decided to keep it a secret since most religious manifestations were repressed in the Soviet Union at the time.

Seventy-five years after his death, the body of Dashi-Dorzo Itigilov was once again exhumed, this time in the presence of multiple witnesses, including two forensic experts and a photographer.

The official statement regarding his body was that it was “in the condition of someone who died 36 hours ago”. It does not show signs of muscle or inner tissue decay and the joints and skin are still flexible. Another mystery is how the body maintained its upright posture.

Scientists and doctors sought formal permission from the Buddhist authorities to study the body. Once it was granted, their findings revealed one formal conclusion – the man is indeed dead, as his body temperature is very low.

The body is still very well preserved: the muscles, joints and skin are still intact, although there has been some damage caused to the skin.

Analysis confirmed the body had not been embalmed or mummified and its amazing state of preservation is a source of bafflement. Although certain Buddhist monks undergo Sokushinbutsu, the practice of self-mummification that takes place while still being alive, this was not the case of this particular monk.

The surprising preservation of Itigilov’s corpse has been a subject of confusion among scientists.