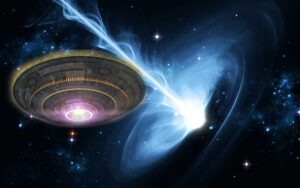 Element 115 is an enigma of sorts. It was only added to the periodic table in 2016, yet for decades it has attracted extra attention because of a supposed connection to extraterrestrial technology and alien lifeforms.

The US military has long denied that anything other than a weather balloon crashed near Roswell in 1947. In 2011, however, the FBI revealed a memo addressed to J. Edgar Hoover, the disposal of three “flying saucers”, reports TV channel History.

Some say that Roswell is just the tip of the iceberg and that globally more UFOs have landed on earth. The debris could be hidden in secret military bases such as Area 51 in Nevada, Kapustin Yar in Russia, Pine Gap in Australia, Rudloe Manor in England and even in remote areas of China.

In 2013, scientists of Lund University in Sweden confirmed the existence of a new element. The Swedish researchers conducted experiments which allowed them to detect the ‘fingerprint’ of the new, very heavy element.

End of 2015, scientists of the University of California developed a special type of metal that is extremely strong and at the same time extremely light. Moreover, the metal is very flexible and resistant to extreme heat.

According to some, this metal is very similar to the metal of the Roswell crash that would have been collected by Major Jesse Marcel. “Most of the objects were extremely light. It was very thin and strong material that weighed almost nothing,” says the Canadian nuclear scientist Stanton Friedman.

“The US government are lying about Roswell for seven decades,” explains the former Canadian defense minister Paul Hellyer. “The United States still pretending it does not interest them, and they know nothing about it. Nothing is less true.”

“Element 115, or moscovium, is a man-made, super-heavy element that has 115 protons in its nucleus,” emails Jacklyn Gates, a scientist with the Heavy Elements Group in the Nuclear Science Division for Berkeley Lab in California. (As with all elements on the periodic table, the element’s number corresponds to the number of protons in the nucleus of the element’s atom.) “That is 23 more protons than the heaviest element that you can find in large quantities on Earth, uranium.”

Gates says that element 115 is an extremely rare element that’s made one atom at a time in particle accelerators. It exists for just a fraction of a second before it decays into another element.

The new element is called ununpentium, but that name – which refers to the 115th place in the periodic table – is only temporary.

Although scientists still know little about this element, it seems to be linked with plutonium, which is used as experimental rocket fuel.

We’re referring to the long-lived story of Robert (“Bob”) Scott Lazar, who in 1989 went public with what he said was top-secret information about element 115.

Lazar claimed to be a former employee at Area 51, the famous (and highly classified) area of the Nevada Test and Training Range operated by the United States Air Force, where his job was to reverse-engineer crashed alien flying saucers. He said that he’d personally worked with element 115, which was used to pilot alien spacecraft.

It is “impossible to synthesize an element that heavy here on Earth. … The substance has to come from a place where super-heavy elements could have been produced naturally,” Lazar said.

Lazar said that he’d seen evidence of anti-gravity propulsion technologies, and nine alien spacecraft stored in a hangar at Area 51. Those spaceships ostensibly used some sort of propulsion system that harnessed the inherent power of gravity, and thus utilized the characteristics of element 115 to work their technological wizardry.

The government doesn’t confirm the employment of anyone who’s worked at Area 51. And as some sources have pointed out, the gist of his claims have never been thoroughly disproved.

Government documents are signs they know more and are very interested in. They are talking about highly advanced propulsion and metal.

“It is special because it is near a predicted ‘island of stability’ where some super-heavy nuclei might have much longer lifetimes. Instead of living for less than a second, they could exist for minutes, days or even years! That is long enough that we might be able to use them for practical applications,” Jacklyn Gates says.