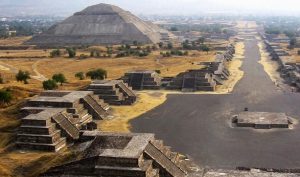 High on a plateau in central Mexico lies the remains of a city that keeps to perplex archaeologists and historians. Of the many ancient cities of the Americas, Teotihuacan is among the most enigmatical.

No one knows what race of people created it, what they used it for, or why it was abandoned.

Without a doubt, the remains are awe-inspiring, but it is believed that 90 percent of this city is still buried under the arid Mexican soil. And yet, this an amazing city of culture held 200,000 residents at its peak. So what happened at Teotihaucán?

When later Aztec races discover this unique urban development they were so impressed by its construction that they named it ‘Teotihaucán’, meaning ‘The great city where men become gods’. The major point of the city, which spread over 12 square miles, was an huge building called the Pyramid of the Sun.

This 216-foot-tall construction had a temple at its summit which suggested the city was ruled by native religion.

At the base of the pyramid ran a north-south avenue, which extended for almost three miles. The Aztecs called this the ‘Avenue of the Dead’, believing the small platforms that lined the series of connecting courtyards to be tombs. In fact, they were probably temples – it has since been discovered that the Teotihaucáns actually buried the dead in their own houses.

At the northern end of the avenue, closest the Sun Pyramid, there was a slightly smaller construction, named the Pyramid of the Moon. About a mile south down the avenue there was a vast open area called the Citadel.

This was also surrounded by temples and had the important Temple of the Feathered Serpent in its centre. Intersecting the Avenue of the Dead at its halfway point was another avenue.

The city was therefore based on a grid system of four quarters. The houses in this format were built in complexes of adjoining dwellings, linked by terraces andpatios. The building of the city began around 200 BC, with the major structures, like the pyramids, being erected from the first century AD.

By the beginning of the fifth century AD, the city covered its maximum surface area, and housed around 100,000 people. Within two centuries this number had doubled.

But who were the inhabitants? Archaeologists and historians really do not know for certain. They were much too early to be Aztecs, and the Toltec race, despite having a similar sense of architecture and civil engineering, did not appear until 200 years after the initial building of Teotihuacán.

There is a possibility that the Olmecs, a race of great builders and craftsmen who had flourished between the fifteenth century BCand first century AD, may have been their ancestors.

However, there is no proof to confirm this, and the writings and records left by the Teotihaucáns, which would provide us with their own version of their history, have never been successfully translated to.

Whoever founded the city did so with intelligent laws and a strict reverence for religious matters. It has been suggested that the city was a major destination for pilgrims and the training centre for priests.

Despite the people enjoying a structured, dignified and privileged life, the city of Teotihaucán was largely destroyed by the eighth century AD. One theory is that the population may have been too great for the local resources although this has been countered by the knowledge that the rulers of Teotihaucán were good enough social and civil engineers to provide for this.

It is more likely that invading barbarians from the north attacked the city. Indeed, what historians have garnered from Teotihaucán murals suggests the roles of soldiers took on more prominence in the city’s later years.

Teotihaucán itself was not designed to repel attacks, and recent excavations have indicated that large, prepared fires were started in the city during its last days.

Even though the origin of the Teotihaucán race is unknown, the influence it had across the Mexican region has been proven to be immense. Some experts consider the possibility that a mass exodus of Teotihaucán citizens founded another town with structure similar to the earlier pyramids at a site 700 miles away in Kaminaljuyú.

But nothing is known for certain. Even after nearly a century of intense historical investigation, the mysterious story of Teotihaucán is as unknown now as it has been for a thousand years.

Sumerian Riddles and a Precursor Culture With Bizarre Reptilian-like Humanoids