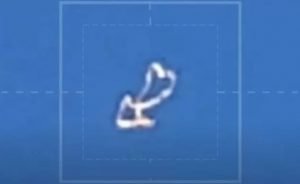 On January 4, 2022, a boy and his father spotted and filmed an organic UFO over Bakersfield, California. An unidentified flying object seen over a California city looked like a worm. In Mexico, such creatures are called Gusano precisely because they resemble large worms. They spin, twist, wriggle in an abnormal way.

Here is a detailed description of two witnesses: “We were about to leave the store to go home, and I noticed something strange.

“At first I thought it must be plastic bags or something similar. Like balloons, but it was something different, just weird. So I brought this to my father’s attention. And we both stood there trying to figure out what the hell we were looking at.“

“We have seen this object rise from about 1,000 feet to an altitude of at least 15,000 feet. We’re sure these weren’t balloons. Because there was wind and the object remained motionless in the sky for a long time.

“Then it suddenly went upward in the ascending phase and wriggled as if it were a large worm. It was a truly mysterious object. I would be more than happy to speak with someone and describe this event in more detail. I just want someone to explain what we saw. Was it some kind of Biological UFO?“

In the video below, you can first see the stabilized version and then the original.