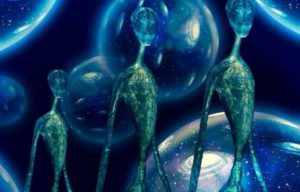 They have been called demons incarnate and they have been researched by the secret scientific institutions using top technology.

Some believe they come to save us and others don’t believe in them at all. But surely you have seen them as you were looking up at the night sky because they live in one of the visible star systems.

Even the ancient Indian Vedas and Puranas, which were written several thousands of years ago, described in details these well-developed living creatures coming to Earth using vimanas – their spaceships. Our galaxy reportedly is shaped in the form of an egg.

Or perhaps the lowest among the superior ones, depending on what view one prefers. All that we see in the sky are the higher heavenly bodies.

So why in the world do they bother coming all the way down here to Earth? According to the UFO-researchers, besides collecting earthly soil probes and various healing herbs for medical purposes, the aliens request permission from the human females to hold their children.

Such children reportedly live longer, feel a lot better in general and succeed in life more than others. However, there are rumors that thousands of earthlings are being kidnapped and taken to an undisclosed location. Very few ever come back afterwards, most of them with memories erased and others with signs of mental illnesses.

The most radical enthusiasts claim that there are no actual natural earthlings left any more. We are all altered extraterrestrials.

Certain representatives from the superior planets who decide to visit Earth are highly intelligent and have beautiful skin, which gives them somewhat of a human resemblance.

Nonetheless, they are most definitely cold-hearted like the amphibians. They are incapable of experiencing human emotions and showing any feelings to their children.

Such aliens themselves are on the brink of extinction because they cannot produce healthy vital offspring. In order to figure out the earthlings’ survival secret aliens either capture pregnant women and study the development of their fetuses or enter into sexual contact with humans in order to acquire an enduring offspring from the mix.

It is not an accident that our planet evokes such an interest among the extraterrestrial delegates. It is believed that the Earth is located upon the Universal Axis.

According to the various Vedic descriptions, inside that axis is a passage leading to the spiritual world, a world eternal and indestructible.