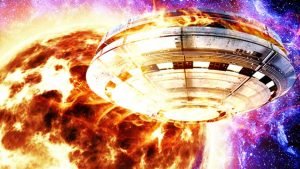 Ufologists often report their sightings of unidentified flying objects (UFOs) near the Sun, but this time it’s a little different.

Famous ufologist Scott Waring discovered a UFO that literally glides across the surface of the Sun.

According to the researcher, an object shaped like a triangle has been gliding over the surface of the Sun for more than a year. He stated this, referring to the images of Helioviewer.

The ufologist said that he contacted NASA scientists through his Twitter account in the hope of getting an explanation for this phenomenon, but did not wait for a response from them. Moreover, they do not answer at all, the ufologist reports.

However, whatever it is, the UFO is triangular in shape and has been cruising there for many years, as evidenced by footage from four NASA cameras (so it’s not a defect in one of the cameras).

The object is black, which means it is not hot, retaining a cooler temperature even as it glides across the Sun. And, most interestingly, it periodically returns to its original position, being in the field of view of the Earth.

Referring to the observation data, Scott Waring calls them indisputable evidence of the presence in the solar system of extraterrestrial civilizations that are monitoring the Earth.