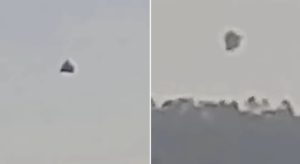 This footage was recorded last year by mining workers for two consecutive days, and reveals at least two UFOs from which at least one seems to land in the canyon near a coal mining site in Australia’s Middleton Queensland.

Day 1— The first sighting shows a UFO that appears almost like an upside down pyramid and is a few miles away from the coal mine and likely a few hundred feet wide when it descends into the canyon.

Day 2 — The second sighting demonstrates another unusual aircraft surrounded by some kind of energy field. The object remains motionless in the air for a while before it also appears to be descending into the canyon.

The objects made no sounds and were not like any terrestrial flying crafts.