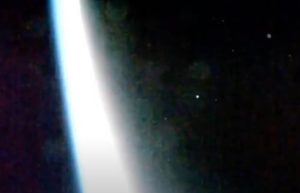 Ufologists and other researchers recently drew attention to dozens of mysterious objects passing by the International Space Station (ISS) during a live broadcast.

This incident caused heated discussion on the Internet.

Countless bright unidentified objects move at different speeds relative to each other from Earth to outer space. Some UFOs are blinking.

One researcher drew a line along all the trajectories of the mysterious lights, and it turned out that they all come from one point, which is located somewhere outside the ISS camera.

People are trying to give an explanation of the incident. Some consider it to be satellites or space debris. Meanwhile, others believe that it may be alien spaceships.

“Most likely, a certain amount of water (or other liquid) fell from the ISS into outer space, which turned into ice crystals”, one commentator wrote.

But not everyone agrees with this explanation.