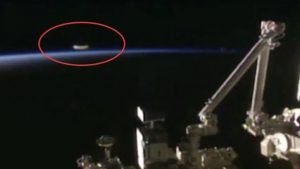 A retired U.S. Navy Medical Corps captain Linenger spent a total of 132 days as part of the 1997STS-81 mission aboard the Russian space station Mir.

He recalled some of the strange things he saw during that period in a recent interview.

“Well I’m going to stick my neck out, but how many people think I saw a UFO when I was up there ?” he said. “Well I did, I saw things in the true sense of the word, unidentified flying objects – don’t take me out of context there – no aliens.”

“But I saw stuff that made me call my crewmates over and say ‘what the heck is that?'”

During his time on Mir, Linenger was joined by two Russian cosmonauts as the first astronaut to ever conduct a spacewalk outside a foreign space station.

The crew could see something strange in space on several occasions but could not decide whether they were looking at a large object in the distance or a small object just outside.

“Is it something 100,000 miles away that’s the size of a big spacecraft ?” he said. “It’s very hard to distinguish that, usually it was something you could kind of explain, maybe an external tank or something like that. But you would see things and you go ‘wow, that’s cool – I don’t know what that was exactly, but it’s not a satellite’.”

“You definitely, just like when you see something weird [on Earth], call everyone over like ‘I don’t care what you’re doing, get over here and take a look at this.'”

Jack Osbourne: ‘US government is covering up the truth about UFOs’