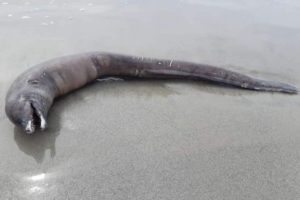 It is rumored that this strange eyeless sea beast has come from the depths of the Pacific Ocean, reports fr24news.com.

Spotted by locals on Destiladeras Beach along Mexico’s Pacific coastline, this sea monster has some very sharp teeth and looks a bit like a dolphin, yet it doesn’t seem to have any eyes or other discernible features like fins or flippers along its dark, snake-like body.

The people who found it initially mistook it for a dolphin, but quickly changed their minds after having a closer look at it.

None of the local fishermen who have come to investigate the carcass could identify what it was.

Some have suggested that it might have originated from a particularly deep part of the ocean off Puerto Vallarta’s coast that descends to a depth of more than 1,000 metres.

If this is true, the darkness could explain its apparent lack of eyes at such depth.

In the meantime, some Internet users have suggested that the image might be a fake and could simply be a dead dolphin with the eyes and other features removed using photo editing software.

Whatever the case, it is an odd photo for sure.