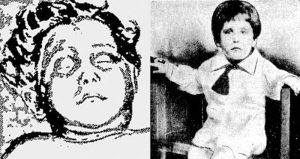 Little Lord Fauntleroy is the nickname for an unidentified small boy found murdered in Waukesha, Wisconsin on March 8th 1921. The remains of the little boy were found floating in a pond near the O’Laughlin Stone Company, and authorities estimated he was between five and seven years old. He had blond hair, brown eyes and a tooth missing from his lower jaw. He had been beaten with a blunt instrument and then drowned.

It was speculated that the boy could have been in the water for between several weeks to several months. He was dressed in a grey sweater, Munsing underwear, black stockings, a blouse and leather shoes, the clothing quality suggested the child came from an affluent family, and it is the quality of the clothing that earned the little boy the nickname of “Little Lord Fauntleroy”.

During the investigation, a quarry worker said he’d been approached by a couple five weeks before the body was found. The woman, who wore a red sweater, was crying, whilst the man was peering out at the quarry, and they asked the quarry worker if he’d seen a young boy in the area. They later left in a Ford vehicle and have never been found.

The investigation turned up very little else, and no one claimed to have known the boys identity.

Police displayed his body at a local funeral home, trying to identify him, but no one came forward to claim the body.

There were reports that a veiled woman made several trips to the boys grave, leaving flowers at the gravesite, although her identity was never established or her connection to the child.
A possible scenario for the case is that Little Lord Fauntleroy may have been abducted from a wealthy family in another location and disposed of somewhere else to prevent his identification.

After the investigation ended, money was raised by a local woman, Minnie Conrad, for the young boy to be buried at the Prairie Home cemetery, in Waukesha, and he was buried on March 17, 1921. She was later buried in the same cemetery in 1940 after she died at the age of seventy-three.

There were sightings of a woman, wearing a heavy veil, who would occasionally place flowers on the boy’s grave. Some have speculated that this woman knew the actual identity of Little Lord Fauntleroy.

In 1949, it was speculated the young boy may have been a young boy called Homer Lemay from Milwaukee, who went missing around the same time. Homer’s father had made the claims, and said that his young son had been on a trip to Argentina, and he was informed by a South American newspaper article that his son had died in car accident.

According to his version of events, a couple called the Nortons looked after their son there, but law enforcement agencies were not able to find the Nortons, or even be able to confirm they actually existed. He also was accused of falsifying his wife’s signature while she was missing, but was later found not guilty.

98 years later the case is still unsolved, and the little boy known as “Little Lord Fauntleroy” is still unidentified.