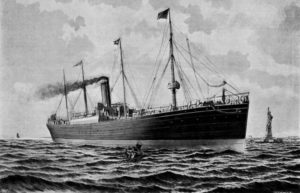 The Titanic disaster was the most legendary shipwreck in history, her name forever haunting the White Star Line. But she was far from the only vessel the company lost over the decades of it’s existence.

Ships such as the Atlantic and the Britannic were also lost while on White Star’s watch. The company also lost several ships to enemy action in the First World War. However, there was only one ship of the company to simply vanish at sea. The SS Naronic.

Launched on May 26, 1892, the Naronic was not a glitzy, glamorous ocean liner but rather a simple working ship. She was built as a cattle ship but later on limited passenger accommodations were added to handle the extra traffic on White Star’s non-New York routes. The Naronic made a successful maiden voyage and plied her quiet trade for five more voyages.

On February 11, 1893 the Naronic departed from Liverpool bound for New York carrying a cargo of cattle. She had a crew of fifty plus twenty four cattleman and was under the command of Captain William Roberts.

Naronic stopped briefly Point Lynas, North Wales, to drop off her pilot, the Naronic headed west into heavy seas and was never seen or heard from again.

The mystery of what happened to the Naronic begins here. It was 1893 and the Marconi wireless radio would not be invented for another five years. Whatever problems the ship’s crew encountered they were on their own. We only have limited evidence of what may have happened next.

The steamer Coventry spotted two of the Naronic’s lifeboats. The first was found capsized and the second was half-sunken. The boats were found only some ninety miles from where Titanic would later sink.

Our second piece of evidence comes from four messages stuffed into bottles and heaved overboard as the Naronic was foundering. Two of these bottles were found off the east coast of the United States, one near Brooklyn, New York and the second near Ocean View, Virginia.

A third was located in the Irish Channel and the last one in the River Mersey near where Naronic departed. The most detailed message comes from the second bottle:

“3:10am Feb 19. Naronic at sea. To who picks this up: report when you find this to our agents if not heard of before. Our ship is sinking fast. It’s such a storm that we can never live in the small boats. One boat already gone with it’s human cargo below. God let us live through this. We were struck by iceberg in a blinding snowstorm and floated two hours. It is now 3:30 am by my watch and the ship is dead level with the sea. Report to the agents at Broadway New York. M. Kersey & Company. Goodbye all.”

The letter was signed by a John Olsen, a cattleman. Curiously, there was no record of a J. Olsen serving aboard the Naronic. It’s possible therefore that the message was a forgery.

The second letter was much briefer, written by a panicked soul facing their own inevitable death:

This letter was signed by an L. Winsel. Again, there is no record of a crewman by that name serving aboard Naronic. Now, the name could have been smudged by sea water leaking into the bottle, or the handwriting was bad due to how hastily the letter was written. There was however, a man named John L. Watson aboard. Could he have written this letter?

Whatever the vessel’s actual fate, nobody amongst her crew survived to tell the awful tale. Rumors flew that she was the victim of a terrorist attack, or that she had indeed struck a berg as the letters seem to suggest. Icebergs were spotted by other ships in roughly the same area.

In the black night, her officers blinded by a snowstorm, an iceberg would have loomed out of the storm far too late for evasive action to be taken. Her hull gashed by the mountain of ice and the storm-tossed waves making use of the lifeboats impossible, Naronic’s crew would have met a quick death in the freezing Atlantic waters.

To this day, the wreckage of the Naronic has yet to be found. Perhaps if it is discovered some day, we will finally be able to piece together what happened that awful night over a century ago. For now however, Naronic remains a haunting ghost ship of the North Atlantic.

Vampire-Hunting Kits From The 1800s: Real or Fake?