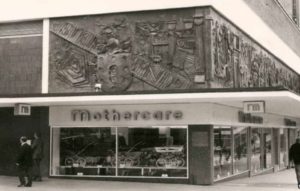 This story of a Time Slip once again comes from the Liverpool area, a hot spot for this type of phenomena. The case involves a 17-year-old from Garston named Imogen who in May of 2011, went on a shopping trip to pick up a few things for her sister Abigail who had recently become a new mother.

Traveling to the Liverpool City Center, Imogen was greeted by a welcome surprise. At the corner of Lord Street and Whitechapel was a new Mothercare store. Thinking that this was her great luck she quickly walked to the store.

Imogen entered the store and began to browse the large selection of items and soon had an armful of goods as she headed to the cashier. Not only did the Mothercare store have everything she wanted, the prices were incredibly low, probably promotional prices for the opening of the new store she thought.

As the cashier rang up her purchase Imogen noticed that the people in the store were dressed rather oddly. Their clothing seemed to be very out dated appearing to be from the 1950′s or ’60′s.

As there were no other customers in the store she thought it was simply the way the staff dressed, although she had never noticed the old clothing at other Mothercare stores.

When Imogen handed her credit card to the clerk to pay for her items she was greeted by a puzzled look on the clerks face. After looking at the card for a few seconds another employee was called over and examined the card.

Neither of the Mothercare employees appeared to have ever seen a credit card before and Imogen was told that they could not accept the card as payment. With little money, Imogen had no choice but to leave the store empty-handed.

Later that evening Imogen told her mother about what had happened. As the two spoke Imogen’s mother ask her exactly where the store was. On the corner of Lord Street and Whitechapel she said.

Her mother responded that could not possibly be as there was a HSBC on that spot, it was the very bank that Imogen’s mother used. Imogen soon returned to the location and there was in fact a HSBC on the site and no sign of the Mothercare store.

As it turns out there was a Mothercare store at the location but that was many years ago, before HSBC moved in.

There are many other stories of people in Liverpool experiencing time slips, most often going back to the 1950s or 60s and this makes one wonder why this could happen here. Is that real time slipping into the past, a glimpse into a parallel universe, or just playing tricks on their imaginations?