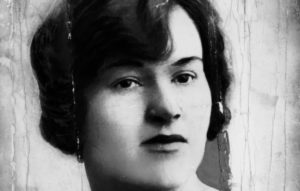 Edith Thompson was executed in 1923 at the age of 29 for conspiring to kill her husband with her teenage lover, Frederick Bywaters. Her trial became a cause célèbre in British media, and almost a million members of the public signed a petition to repeal her death sentence.

It is believed that she was pregnant at the time of her execution, and her executioner later committed suicide due to the guilt of killing the unborn baby.

In 1916 she married her husband Percy Thompson and four years later in 1920 the couple became acquainted with 18-year-old Frederick Bywaters, although Bywaters and Edith Thompson had met nine years earlier when Bywaters, then aged nine, had been a schoolfriend of Edith’s younger brother.

By then Bywaters had joined the merchant navy and 26-year-old Edith was immediately attracted to the 18-year-old, whose stories of his travels around the world excited Edith’s love of romantic adventure.

Percy welcomed the youth into their company, and the trio, joined by Edith’s sister Avis holidayed on the Isle of Wight. Upon their return, Percy invited Bywaters to lodge with them.

Soon afterwards, Edith and Bywaters began an affair, which Percy discovered and after throwing Bywaters out of their home, and in the aftermath there was a number of violent confrontations between Edith and Percy.

From September 1921 until September 1922 Bywaters was at sea, and during this time Edith Thompson wrote to him frequently. After his return, they met up again and continued their affair.
On 3 October 1922 the Thompsons attended a performance at the Criterion Theatre in London’s Piccadilly Circus, and returned home to Ilford by train.

As they walked along Belgrave Road, a man jumped out from behind some bushes near their home, and attacked Percy which resulted in him being stabbed and Edith being knocked to the ground. The attacker fled.

At the police station Edith confided to police that she knew who the killer was, and named Frederick Bywaters. Believing herself to be a witness, rather than an accomplice, Thompson provided them with details of her association with Bywaters.

As police investigated further they arrested Bywaters, and upon their discovery of a series of more than sixty love letters from Edith Thompson to Bywaters, arrested her too. The letters were the only tangible evidence linking Thompson to the murder, but it was enough to see both charged with murder.

The trial began on 6 December 1922 at the Old Bailey and the love letters were produced as evidence. In these, Edith Thompson passionately declared her love for Bywaters, and her desire to be free of Percy.

She said in her letters that she had ground a glass light bulb to shards and had fed them to Percy mixed into mashed potato, and on another occasion had fed him poison. According to those letters, not only did Percy fail to die, he had failed to become ill, and Edith now implored Frederick to “do something desperate”.

Thompson’s counsel urged her not to testify, stressing that the burden of proof lay with the prosecution and that there was nothing they could prove other than that she had been present at the murder. By this time Thompson seemed to be enjoying the publicity she was attracting and insisted that she would take the stand.

Her testimony proved damning, and she was caught in a series of lies. Her demeanour was variously flirtatious, self-pitying and melodramatic, and she made a poor impression on the judge and the jury, particularly when she contradicted herself.

Bywaters maintained throughout that Edith Thompson had known nothing of his plans, nor could she have, as he had not intended to murder her husband. His aim had been to confront Percy, and force him to deal with the situation and grant Edith a divorce, and when Percy had reacted in a superior manner, Bywaters had lost his temper and stabbed him.

Edith, he repeatedly stated, had made no suggestion to him to kill Percy, nor did she know that Bywaters intended to confront him.

In discussing the letters, he stated that he had never believed Edith had attempted to harm her husband, but that he believed she had a vivid imagination, fuelled by the novels she enjoyed reading, and in her letters she viewed herself in some way as one of these fictional characters.

On 11 December the jury returned a verdict of guilty, and both Thompson and Bywaters were sentenced to death by hanging. Thompson became hysterical and started screaming in the court, while Bywaters loudly protested Thompson’s innocence. 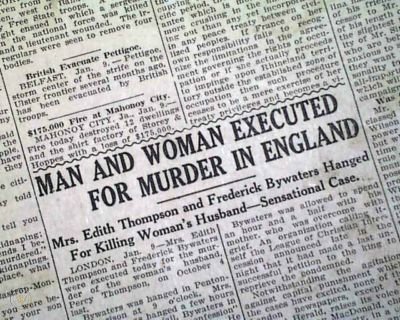 On January 9, 1923 in Holloway Prison, 29-year-old Thompson collapsed in terror at the prospect of her hanging and, unconscious, had to be supported on the gallows by four prison warders, who half carried her to the scaffold, where she had to be held upright while the noose was placed around her neck.

Various accounts report that “guards had to tie her to a small wooden chair before drawing the noose around her neck”, and that “she was hanged in a bosun’s chair”, and upon being hanged she had a massive vaginal hemorrhage which many believe meant she was pregnant at the time of her death.

John Ellis, her executioner, committed suicide 9 years later, slashing his own neck with a razor, stating that he had remained haunted by the horror of Thompson’s final moments and the killing of both her and her unborn baby.