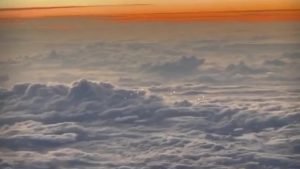 The man believes he saw a series of UFOs while flying over the Pacific Ocean and captured a short clip of the 12 lights that appear to be spinning and moving at great speed.

One pilot believes he saw an entire fleet of UFOs flying over the sea, after detecting a series of strange lights that appear to move and rotate.

Twelve in total – moving together in the same direction, with some briefly disappearing and reappearing as they move through the clouds.

“I do not know what that is. That is some weird s***. That is something flying,” the captain can be heard talking to his co-pilot.

At one point the highest point vanishes and is replaced by another one lower, then finally they all seem to disappear from view.

Researcher Scott C Waring shared the video onto his YouTube channel and called the sighting a “demonstration of power by aliens”.

“It is clearly a sign meant for the military powers of the world patrolling those seas to view,” he added.

Whatever the case, it’s certainly an interesting piece of footage.