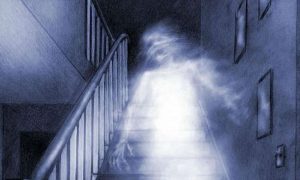 British specialist in information technology Vic Tandy says he will never forget that night. He was working overtime in his laboratory at the University of Coventry, England, reports pravdareport.com.

The clock showed 7 p.m. All of his colleagues had already left yet Tandy seemed to have lost the sense of time because his work absorbed him completely. All of a sudden he felt cold sweat running down his back – he could feel somebody watching him.

He looked around and saw something gray, fog-like and somewhat shapeless moving closer in his direction. It was apparently moving and looking right at him. The apparition vanished in thin air when it was just couple of feet away from Vic. The researcher cursed loudly, took a deep breath, and wiped the sweat from his face.

The above is just the beginning of a story relayed by Tandy to one of the British dailies. The remaining part unfolds like a detective movie interspersed with scientific details.

Being a true researcher, Tandy decided to do research on the phenomenon and place it on solid scientific grounds. Having become a “ghost buster” of sorts, he spent five years looking into all the stories related to ghosts observed in the old English castles. He lay in wait at night.

He studied the readings of scientific equipment. Eventually, he learned from whence the ghosts came. He even put forth the reasons why the English happen to witness ghosts more frequently than the residents of other countries.

“The ‘dead people’ in this country have more reasons to walk round the corridors and towers of the old castles and mansions because of the strong sea winds blowing swiftly across the British Isles,” says Tandy.

“The winds produce the sound waves of a particular range, which until recently researchers have failed to take note of. The people traditionally see the phenomena created by those sound waves as specters,” adds he.

The researcher arrived at the conclusion by accident. He brought a rapier to his workplace one day after he saw the ghost in his laboratory. The rapier needed repairing for a competition Tandy was going to participate later that week.

He held the rapier in a vice and soon saw it oscillate as if an invisible hand was swinging the rapier back and forth. The researcher was confident that he was witnessing the phenomenon of resonance.

It was very quite in the laboratory at the time. Tandy got down to measuring procedures using a number of devices. He was really amazed to find out that terrible noise and rumbling was, in fact, filling the laboratory at the very moment. But all the sounds were infrasonic i.e. with frequencies below the audible range.

It did not take Tandy long to locate the source of noise. The noise was coming from a new ventilator, which was recently installed in an air conditioning system. Once the researcher switched off the ventilator, the rapier stopped vibrating. A moment later an interesting idea crossed his mind: “What if the infrared phenomenon has to do with ghosts?”

The sound waves in the laboratory-measured a frequency of 18.98 Hz. It roughly equals the frequency movement of a human eyeball.

The wind gusts blowing against the walls of an old tower produce the sound waves within the infrasound range. The sounds can penetrate the thickest walls. When in a tower, one can hear the wind howling and moaning like mad in the corridors.

“It’s not a coincidence that the ghosts allegedly walk along the long corridors where drafts fly bouncing over the walls,” says the researcher in proof of his theory.

So far Tandy has failed to explain why the “resonant sounds” took shape in such a form. Besides, it is still unclear how the potent infrasonic waves react if they are produced by strong gusts of wind or vehicles and airplanes zipping by.