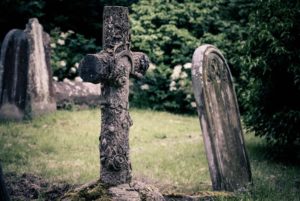 In the early 1980s, Sam and Judith Haney were one of several couples who purchased homes in the Newport area of Houston, Texas. However, when Sam went about having a swimming pool dug in his back yard, an elderly man showed up at his door appeared to report that he was about to dig up human remains.

The reason he knew they were there was because he had buried them there years before when the land was still a cemetery. Proceeding to dig, it was long before Sam hit upon two bodies just where the old man said they were.

There were two pine boxes, each with the indentation of a skeleton form. Sam immediately called the Sheriff and county coroner who conducted an official exhumation. Most of the bones had turned to powder, but twenty-five fragments were found, some so brittle that they disintegrated when touched.

Two wedding rings were discovered on the frail index finger of the exposed skeleton. Local research revealed the remains were Betty and Charlie Thomas, who died during the 1930s. The land had been set aside by the original property owner years before as an African-American cemetery and sold after it had been forgotten.

Construction crews destroyed and eliminated all traces of it during the building of the sub-division. However, the dead would not rest. One night, Judith Haney discovered her clock glowing and sparking.

She’d also hear her sliding door open and close as if someone was there, but she never saw anyone. Her shoes once vanished and turned up inexplibly outside over Betty and Charlie’s grave, now since re-interred elsewhere.

The activity was not preclusive to the Haneys. A dozen of their neighbors also reported lights, televisions and water faucets turning on and off, and unearthly sounds and supernatural apparitions.

Ben and Jean Williams reported that near their flowerbeds, sinkholes appeared in the unmistakable shape of a coffin. They would fill them in, only to have them reappear a few days later. Random shadows also slid along their walls accompanied by whispers and a putrid smell.

Their granddaughter, Carli, lived with them, buring the blazing heat of summer, she would encounter bone-chilling pockets of ice-cold air. “It would be very, very chilly and you’d have this feeling of foreboding, or just, you know, like something wasn’t right.” She said.

“Anywhere in the house you’d have a feeling that you were not alone. Somebody was watching you. It terrified me to be in the house by myself. The toilets used to flush on their own. As the water went down I could hear, it was almost like conversations. You could hear people murmuring to themselves. It was a presence or spirit or something there. Something that wanted to be heard. Wanted me to know that it was there.”

Jean added: “I absolutely believe that all of these things happened to us because we were on the graveyard, and that we were simply going to be tormented until we left there.” Ben Williams also encountered things. He described encountering two ghostly figures in his home as he came home from the graveyard shift. They went straight into the den and headed down the hall where they vanished.

Meanwhile, the Haneys were suing the developers and ended up losing their case and filing bakruptcy. The Williams followed with legal recourse, but the developers wanted proof there was ever a cemetery. Jean started digging up her backyard for more remains, but shortly thereafter, her daughter, Tina died after trying to help her.

Jean believed her death was caused by supernatural forces. She and Ben ended up losing their entire investment and escaped to Montana, later moving back to another house in another neighborhood in Texas. However, back in their old neighborhood, none of the current residents have reported any paranormal activity. No one has ever been able to explain what happened to the Williams or the Haneys.