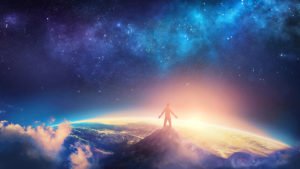 A solid, harmonious and peaceful society relies heavily on the strength of its core foundational beliefs. At the helm of it all, is the understanding of the meaning of life.

Although humans have been around for thousands of years, the answer to this fundamental question has only been partial. The difficulty resides in the multidimensional aspect of life which many fail to grasp from the question itself, therefore the answers given never seem to satisfy. However, with recent discoveries in science, a sensible answer is slowly taking shape.

For many of us, the meaning of life has adopted a rather religious tone. Even those who do not consider themselves to be religious, have somehow taken on this fundamental religious version of life.

Essentially, it goes like this, we believe in a God or something or someone, who is greater than any and all of us, in all conceivable ways. This being gave us life and upon death we shall end up in heaven or hell.

On the other hand, we have the scientists who struggle in their understanding of what makes something alive. Animals, plants, bacteria and organisms are considered alive while rocks and minerals are not.

Even when it comes to what is considered alive, there is much confusion regarding the exact point when something actually becomes alive. If we did have such accuracy and knowledge on the matter, there would be no controversy around the issue of abortions.

The implications about our understanding of life are far reaching. From mental health issues to thousand-years-old cultural rituals, everything changes with a new definition of life.

Out of all the branches of influence in our world, the scientific branch carries the heaviest weight. As fewer and fewer people turn towards the teachings of the church, science has become our refuge.

Today science is the authority giving the final stamp of approval when it comes to knowledge and there are a couple of scientific discoveries, we should all be aware of, should we wish to update our understanding of life.

Some Scientific Discoveries We Should all be Made Aware of

Our confusion towards life is reflected to us by what we do. Confusion creates lack of direction. This lack of direction in turn, creates stress. Stress stemming from us being pulled in multiple direction at the same time and a stressed society needs entertainment to relieve itself from the tension.

Perhaps this is why so many life-changing discoveries fail to make the impact they are meant to as people tend to constantly seek relief instead of knowledge. There are a couple of discoveries in science we should all be made aware of:

Fractal geometry is a branch of mathematics dealing with shapes found in nature. It has been discovered that the entire shape of an object can be found in the smallest part. The shape replicates itself within itself and goes on for infinity.

Quantum Mechanics is a branch of physics dealing with the behaviour of wave particles. While studying quantum mechanics, it has been concluded that we exist in a unified field meaning that we are fundamentally one. We are all consciousness.

When these two discoveries were made, they created a lot of buzz in the scientific community for these theories are eerily similar to what many philosophers, psychics and shamans have been saying for a long time but using a different jargon.

If we are all fundamentally one and as fractal geometry shows, are we a replicate of something bigger? Could this be where the original concept of God came from?

If we are a replicate of the whole, does this mean we have all information available to us? Information we have yet to access that is somewhere in our subconscious?

If we are all one, then do we have control over the whole? Over the creations in life? The miseries, sadness, joy and prosperity we encounter, are these somehow the result of our creation? How much control do we really have? Is there a limit to what we can control?

If we are all one, then are we all connected to each other including plants, animals, mountains and ocean?

And finally if we are all the same being, then there has to be some state of balance, which means that everything we do must have consequences somewhere within “us”. When philosophers, psychics and shamans say that physical life is a reflection of the intent we project into the world, is this what they meant?

Are we God? Have we been looking at ourselves all this time blaming each other without knowing that the power to change everything resides within us?

Quantum physicists will tell you that what they’ve found so far is only the tip of the iceberg.

Then perhaps we should start paying a lot more attention to what we are doing, to what we are thinking and how we are expressing ourselves. All of the problems we face, everything falls directly on our lap.

As Dr Norman Vincent Peale would say, “if you want things to be different, perhaps the answer is to become different yourself.”

We may not see the full picture just yet, and thus understand the how, but this is what our current understanding of science is telling us. While there is still much work to be done, new theories to be discovered, the direction has been set and it points directly to the self.