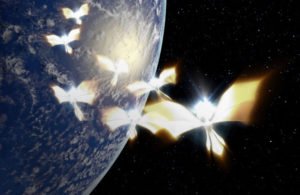 UFOs, angels and other supernatural phenomena, which people may encounter in their lives, can only be a result of hallucinations, NASA specialists said. However, stories about such encounters, told by pilots, cosmonauts and astronauts, become classified immediately.

In 1985, there were six crew members on board the Soviet Salyut-7 space station. They were cosmonauts Leonid Kizim, Oleg Atkov, Vladimir Solovyov, Svetlana Savitskaya, Igor Volk and Vladimir Jannibekov. That day, the cosmonauts were doing their routine work connected with laboratory experiments. All of a sudden, a cloud of strange orange gas enveloped the station.

A flash of bright light blinded all the cosmonauts on board for a while. As soon as they could see again, the cosmonauts saw silhouettes of seven figures outside the station. The aliens looked like humans, but were of higher stature. They also had large wings behind their backs and luminous halos above their heads. The creatures looked like angels.

The crew reported the bizarre sight to the Earth. The document was classified as top secret immediately. All members of the crew were subsequently subjected to psychological and medical tests, which found no abnormalities at all.

It was not the only encounter with angels which took place in space. Not so long ago, the Western media published sensational photos made by Hubble telescope. The photos depicted strange images including human-like winged silhouettes.

Researchers were especially interested in a series of photos made on Earth’s orbit. One could see seven luminous objects on them. John Pratchett, an engineer of Hubble project, said that he had seen those creatures himself.

According to him, they were live objects up to 20 meters tall, and their wing spread could be comparable to the length of a modern jetliner. It was also said that US astronauts on board NASA’s space shuttles also encountered angel-like creatures.

On December 26, 1994, Hubble telescope transmitted hundreds of photos depicting a large white city floating in space. US authorities did not expose the photos to the general public, of course, although it was rumored that US officials treated NASA’s report very seriously.

A Russian cosmonaut who spent six months living and working on board the Mir space station, said that he and his partner had had fantastic visions from time to time. It seemed to the men that they were turning into other creatures – other people, or animals, or even humanoids of extraterrestrial origin.

Similar stories may often be told by aircraft pilots. In this case, it may frequently go about the so-called phenomenon of a giant hand. As a rule, the phenomenon occurs during long-lasting flights.

When it happens, a pilot feels that the control wheel is being grasped by someone’s invisible hand. Researchers from the US Air Force concluded that nearly 15 percent of pilots have experienced the effect during their work. It is not ruled out that the giant hand phenomenon is behind many air crashes.

NASA psychologists say that the majority of the above-mentioned phenomena are of psychic nature. They may occur as a result of such factors as pressure and temperature fluctuations, shortage of oxygen, etc. But what if it is not?

What if there are another type of living organisms in space? Would they tell us that?