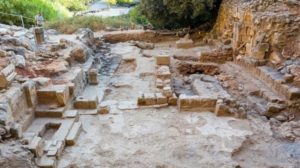 Researchers have discovered a lost church under a road in an ancient Roman city where Jesus was believed to heal a bleeding woman.

According to the Daily Mail, archaeologists at the University of Haifa believe that the church existed in the city of Banias, which was renamed Caesarea Philippi during Jesus’ lifetime.

During excavations, experts found a hidden church building. Professor Adi Ehrlich believes that this place could be associated with a biblical miracle.

“There is another church excavated some 30 years ago on the other side of the springs, but our little church is more of a memorial than a practical basilica for services,” the researcher explained.

“So it could have served as the place commemorating the event.”

The miraculous healing of a woman by Jesus is described in the Gospels of Matthew, Mark and Luke. It describes that she was bleeding for 12 years.

Despite the observation of the doctors, she became worse, then she decided to turn to Jesus. The woman touched his cloak as he walked through the crowd, whereupon she was immediately healed.

The oldest pyramids on Earth hides under the snow of Antarctica