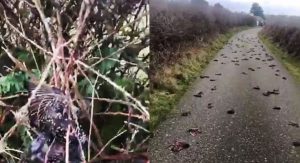 Wales authorities are trying to get to the bottom of a rather disturbing mystery following the discovery of the bodies of hundreds of dead birds on a road.

Birds lie on the road in such poses, as if they had fallen dead from the sky. Visually on their bodies there are no cuts or anything else, which would imply that the death of birds is the work of people. There are also no ulcers or other signs of illness on the bodies.

While the cause of the death of the birds remains unknown, the carcasses of birds are collected by cleaners and several of them have already been taken to the laboratory for examination.

The bodies of most birds are broken so badly, as if they were falling from a very great height.

Some of the birds found were still alive, but they barely moved. They were taken to a veterinary clinic for nursing.

Employees of the local health agency and the agency for plant and animal affairs do not make any assumptions, indicating that first need to wait for the test results.