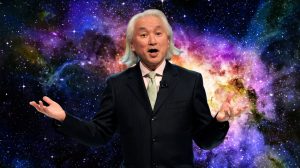 Michio Kaku, who is highly regarded in the scientific community thanks to his work in helping to popularise the String Theory, has developed a new theory which he says points to the existence of God or an intelligent designer for the universe.

The American scientist, who is a professor in theoretical physics at the City College of New York, came to his conclusion by studying “primitive semi – radius tachyons“.

These tachyons are theoretical particles that have the ability to “unstick” matter in the universe or vacuum space between particles, essentially leaving everything free from the influence of the universe.

“To me it is clear that we exist in a plan which is governed by rules that were created, shaped by a universal intelligence and not by chance.”

With all of the calculations that would need to go into creating a successful universe, Mr Kaku says that God is a mathematician – which could imply that we are living in a simulation, which many experts are considering the notion of.

He said in a YouTube video: “The final solution resolution could be that God is a mathematician.

“The mind of God, we believe, is cosmic music, the music of strings resonating through 11-dimensional hyperspace.”

He’s noted that discerning whether you live in a Matrix-style construct or not would be another such ‘non-falsifiable’ problem.

Caught the biggest catfish in the world