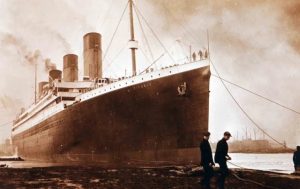 In the early hours of April 15th 1912, RMS Titanic had her name permanently etched in the annals of maritime history. Over the years, a multitude of rumours have circulated surrounding her sinking ranging from evidential studies of her speed of descent and debris spread on the ocean floor all the way through to supernatural influences.

This three-part article delves into the more fanciful of those rumours.

RMS Titanic was built alongside her sister RMS Olympic at the Harland and Wolff Shipyard in Belfast, Ireland between her initial laying down on 31st March 1909 until her pre-completion launch on 31st May 1911. The 3rd Olympic-Class sister, RMS Britannic, would be built later.

Titanic and Olympic were almost identical in size, profile, and detail with only very minor differences between the two Goliaths. While the majority of building works on the two vessels took place at the same time, Olympic was always to be the lead ship for White Star Line’s Olympic-Class fleet and as such she was started and completed earlier than Titanic; her pre-completion launch took place on 20th October 1910.

On 20th September 1911 off the coast of the Isle of Wight, the Olympic was struck – and severely damaged – by the British warship HMS Hawke. Despite the damage, Olympic managed to return to Southampton under her own power. As an interesting aside, the collision with HMS Hawke occurred while Olympic was under the command of Captain Edward Smith, who would be lost at sea less than a year later with Titanic. 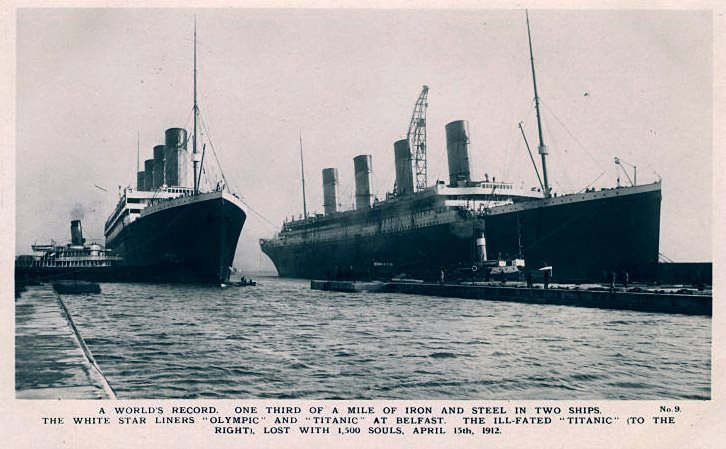 The damage caused by the collision with HMS Hawke had dramatic implications for White Star Line; found culpable for the collision, the company’s insurance would not cover her repair costs and having the ship out of service while Titanic lay unfinished in the Belfast shipyard could have serious implications for the company. Getting Olympic repaired and operational again was pushed to the forefront of the White Star Line’s interest.

A Plan of Fraud on a Massive Scale

The popular urban legend kicks into place here, as instigated and investigated by Robin Gardiner in his book, “Titanic: The Ship that Never Sank?” (Ian Allen Publishing, 1998). To save time and money, says the legend, White Star Line merely patched up the damage to the Olympic; meanwhile, under cover of darkness, Titanic was readied as the new Olympic. Very little between the two ships was branded with the individual vessels’ name so, by changing the bell, lifeboats, and name plates along with minor amendments to navigational equipment, the two ships could easily be switched.

According to Gardiner, White Star Line’s plan was to run Titanic as the Olympic and scuttle the original Olympic during her maiden voyage disguised as the newer vessel thus allowing them to claim the insurance money for the Titanic while ridding themselves of a money trap in the original Olympic.

White Star Line planned for rescue ships to be posted in the vicinity of the planned sinking, hence there was no need for sufficient lifeboats on board to cope with the number of passengers as the boat would sink slowly and several runs could be carried out to the rescue boats. Of course this plan backfired spectacularly as we all know but Gardiner suggests that even this is not necessarily in the reported way.

For a more balanced view on this argument, Bruce Beveridge and Steve Hall’s book “Olympic and Titanic: The Truth behind the Conspiracy” (Six Star Publishing, 2004) offers an unbiased and reasoned account of the fact and fiction of this theory and is a highly recommended starting point for further reading on this subject.

Subsequent studies and investigation of the wreck appear to have proved that it is indeed the original Titanic that lies on the sea bed and Olympic overcame the damage caused from the collision with HMS Hawke and continued to serve the White Star Line until her retirement and scrapping in 1935. Despite these conclusions, the tale remains a fascinating theory that continues to be debated today.

Part 2: What Sank the Titanic?

The commonly-held belief that the Titanic fatally struck an iceberg in the north Atlantic has been questioned a few times in the years since the event.

One theory is linked to Part 1 of this article and again comes from Robin Gardiner in his book “Titanic: The Ship That Never Sank?” (1998. Ian Allen Publishing). This theory suggests that, while en-route to the proposed location where the attempt to sabotage the ship – ostensibly by releasing the sea cocks to slowly flood the vessel – was to take place, Titanic and Olympic (henceforth referred to simply as Titanic) actually struck an un-lit International Mercantile Marine Company (IMM) vessel.

IMM had absorbed White Star Line in 1902 and the ship that was struck is said to have been one of the vessels positioned to rescue passengers from theTitanic once the controlled sinking had commenced. This would explain why the boat was drifting without any form of lighting and why it was not seen in sufficient time to prevent the collision. 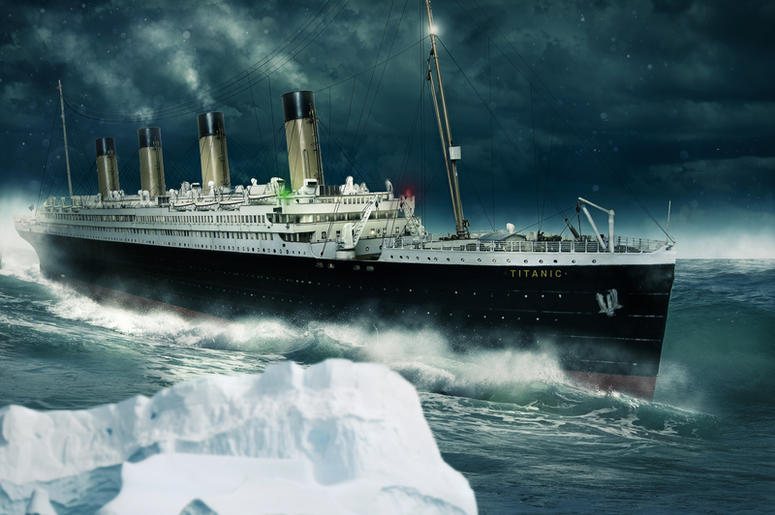 This theory, explains Gardiner, would also justify the actions of the nearby Californian, a ship that was castigated in the trials following the Titanic tragedy for not making her way to the stricken liner to assist in the rescue.

Gardiner also surmises that the ice found on the deck of the liner did not come from the iceberg at all, but instead was shaken loose from the rigging of the IMM vessel and the Titanic itself by the impact.

An unnamed survivor of the sinking also noted seeing a half-submerged vessel in the water directly after the collision; Gardiner suggests that this was most likely a lifeboat which had been knocked from the IMM ship during the collision and other theories put forward that the IMM ship then limped away from the scene so as not to be found within the area of the Titanic although there remains the possibility that the sinking vessel sighted was in fact the IMM rescue boat itself.

The iceberg theory was once again called into question in 2003 when former Captain of the Ice Pilotage Service, L. M. Collins, published his book, “The Sinking of the Titanic: The Mystery Solved” (2003, Souvenir Press). In his study, Collins drew on his experience in ice navigation along with witness statements from the two post-incident enquiries that took place at the time.

Collins notes that reports relating to the height of the ice varied dependant on the position on the ship of the witness. These reports varied from being low in the water on the starboard side, through 60ft high in front of the ship to a massive 100ft (30m) high being reported by Quartermaster Rowe on the poop deck.

Collins suggests that this difference in heights can be attributed to an optical illusion common to navigators of ice plains whereby cold air and flat seas combine to make the ice appear to be as high as the vessel’s lights at that point.

Further to this Collins states that, as the Titanic turned through pivoting at a point located approximately a quarter of her length from the bow, reports of the ship being pulled hard to starboard would have actually resulted in the ship not catching a glancing blow from the iceberg but instead striking it square on the starboard side. Collins relates that a collision such as this would be more likely to crush the entire starboard hull and possibly even the superstructure resulting in the ship capsizing and sinking within minutes.

One of the more bizarre rumours surrounding the liner was the tale of sectarianism in her birthplace of Belfast leading to a curse on the ship. The rumour would have us believe that Titanic was given the yard number 390904 which, when read as a reflection via a mirror, resembles the statement ‘NOPOPE’.

This was deemed as an indication of the company’s alleged anti-Catholic beliefs, compounded by a shortage of Protestant employees. While it was true that Harland and Wolff employed very few Catholics, it is unproven as to whether this was as a result of employment policy or merely due to the location of the shipyard in an area of Belfast that was highly-populated with Protestants.

In fact, Titanic and her sister Olympic were granted the yard numbers 401 and 400 respectively. But of course, that doesn’t make for nearly as juicy a tale!

The tale tells of the discovery in the 1890’s of the mummified remains of an Egyptian Priestess, often thought to be that of the Priestess of Amen-Ra. Following the discovery, the person who purchased the mummy ran into a string of unfortunate incidents and illness, culminating in his eventual death.

Following the death of the initial purchaser, the mummy was donated to the British History Museum where the remains continued to cause concerns for staff and mysterious afflictions to affect those visitors that had dared to photograph her. 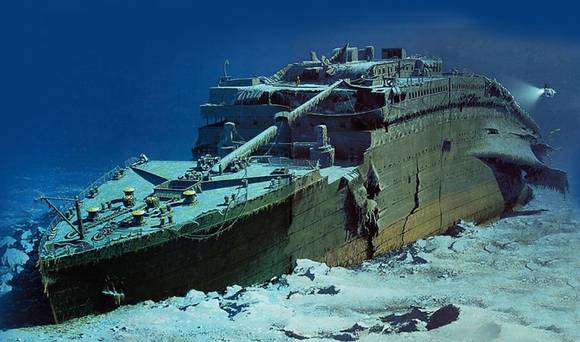 Ongoing incidents and an elevated interest from the British press lead to the mummy being locked away in the Museum vault until journalist William Thomas Stead, discounting the previous events surrounding the remains as mere circumstance purchased the mummy and set in action plans to have her shipped to New York.

Reports at this point separate as some state that the mummy was in fact included on the cargo list of the Titanic (although this had been proved incorrect) while others report that the remains were actually hidden underneath Stead’s car as he feared that White Star would not accept her as cargo due to the reputation of the piece. Stead then reportedly revealed that he had stowed the mummy away to other passengers during merry-making the evening before the collision.

‘Futility’ – A Premonition of Disaster?

In 1898, Morgan Robertson published his novella “Futility”, otherwise known as “The Wreck of the Titan”. The story relates the fortunes of the hero, John Rowland, following the sinking of the World’s largest liner on her maiden voyage through striking an iceberg in the North Atlantic.

While the Titan was actually travelling in the opposite direction to the Titanic in the novel and she strikes the ice head-on as opposed to the glancing blow of the real ship, there remains some startling similarities between the 2 vessels.

– Both ships sank in a similar position (approximately 400 miles off Newfoundland) on an April night on their maiden voyage.
– The Titan was also the largest ship afloat and was deemed to be “unsinkable” / “indestructible”.
– The Titan also had as few lifeboats on board as was possible and nowhere near sufficient numbers to cope with the level of passengers on board.
– The casualties of both wrecks were considerable, taking the lives of in excess of half of the passengers on board.

Indeed, the similarities went even further with the fact that the Titan hit and sank a sailing ship, while the Titanic only narrowly avoided a collision the SS New York; when the Titanic left her berth on her maiden voyage, the New York was dragged from its moorings in the wake of the much larger ship and pulled towards the liner, missing her by around 4 feet before being towed away by a patrolling tugboat.

While, of course, Robertson could not have had any pre-cognition regarding the building of the Titanic – the Olympic-class liners had not even begun their design stages at the time of the novels’ release – the similarities between the story and actual events provide a quite astounding example of coincidence.