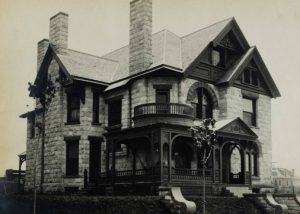 The Molly Brown house, is located at 1340 Pennsylvania Street in Denver, Colorado and is said to be haunted by Molly and her husband. The house which is now a museum has seen activity such as blinds opening and shutting by themselves, shadowy figures walking around and sudden cold spots especially in Molly’s bedroom. Another apparition often seen in the house is a women often seen rearranging the furniture, and she has even supposedly been captured on film.

The Molly Brown House was the home of the American philanthropist, socialite, and activist Margaret Brown, who to become known as “The Unsinkable Molly Brown” after she survived the sinking of the RMS Titanic, that infamously sank on her maiden voyage on 15th April 1912 with the loss of 1,517 lives.

The museum now located in her former home presents exhibits representing her life and that of Victorian Denver and the house was listed on the National Register of Historic Places in 1972.

Originally built in the 1880s by architect William A. Lang, it was purchased by James Joseph Brown (J.J.), Margaret’s husband in 1894 and the title was transferred to Margaret in 1898, possibly due to J.J.’s deteriorating health.

As Margaret and the family travelled extensively, the house was often rented out, however during the Great Depression, Margaret was forced to turn it into a boarding house under the supervision of her housekeeper. When Margaret died on October 26th 1932, at the age of 65, the house was sold, and as it was by then in some disrepair, the new owners drastically remodeled it to house 12 roomers. In the years following Margaret’s death the home was sold to one owner after another, and each time falling more and more into disrepair. By the 1950s the neighbourhood and home were in major decline.

The house continued to deteriorate and by 1970 was set for demolition, but a group of concerned citizens formed Historic Denver, Inc., and raised the funds for the house to be restored to its former glory. In restoration, the group used architectural research, paintchip analysis, and original photographs taken in 1910 as guides to reconstructing it. Today the home is still owned by Historic Denver, Inc., and public tours are run on a daily basis.

The ghosts that are said to haunt the house include Margaret and her husband James. J.J. as not been seen but the smell of his pipe is often noticed in the home’s basement and attic, which is somewhat ironic because while J.J. lived in the house Margaret never allowed him to smoke indoors. Besides doors opening and shutting on their own, many witnesses have seen the blinds open and close on their own in the bedroom that was once Margaret’s daughter Helens. Margaret’s mother has also been spotted standing at the window of her old bedroom.

Another ghost that is seen in the house is that of a woman who wears a long Victorian dress. She is seen sitting at the dining room table and she is known to rearrange the chairs in this area, although her identity is unknown.

In the mid 2000s a tour guide, Demetrius O’Connor who was closing the house for the day, was walking on the back stairs when he felt a very cold breeze, when he subsequently turned the corner he noticed that a second floor window in one of the bedrooms was open.

He shut the window and as he was replacing the rope that cordons off the room from visitors entering it, he noticed a shadow of a woman on the ground next to his. When he turned to see who it was no one was there.