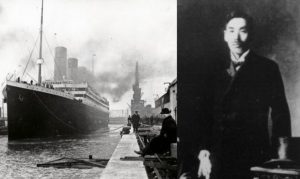 When the Titanic hit an iceberg and sank in the early hours of April 15th 1912, after colliding with an iceberg during its maiden voyage from Southampton to New York City, it claimed the lives of 1,517 women, men and children, but Masabumi Hosono was not one of them.

Hosono was the only Japanese passenger on board the RMS Titanic, and was lucky enough to survive the Titanic’s sinking. He was one of the fortunate few who escaped on a lifeboat, although he did not feel quite so lucky when he returned to Japan.

He was called a dishonorable coward for not falling on his own sword, and soon found himself condemned and ostracised by the Japanese public, press, and government for his decision to save himself rather than go down with the ship.

Hosono had fought his way to the deck. He said, “All the hideous blue flashes from the flares and the noises were simply terrifying. There was a feeling of utter dread and desolation.” He had all but resigned himself to the inevitable, believing he had no choice but to share the Titanic’s destiny.

Saying goodbye in his mind to his beloved wife and children back in Japan, he watched women and children climbing aboard lifeboat 10. An officer cried, “Room for two more”, and seeing a man jump aboard, without thinking he followed suit.

On the boat, Hosono heard the cries of those drowning, the children sobbing for their fathers and the women crying for their husbands.

Hosono’s story attracted little attention at first. He went to the offices of Mitsui in New York to ask friends for help to get him home, and from there he traveled to San Francisco to board a ship back to Japan. A local newspaper heard of his story and dubbed him the “Lucky Japanese Boy”.

Hosono soon found himself the target of public condemnation however. He was publicly condemned in the United States, and was described as a “stowaway” aboard lifeboat 10 by Archibald Gracie, who wrote a best-selling account of the disaster, while the seaman in charge of the boat, Able Seaman Edward Buley, told a US Senate inquiry that Hosono and the other man must have disguised themselves as women in order to sneak aboard… which was untrue.

After returning home to Japan, he was publicly shamed as a coward and fired from his job at the ministry of transport. Some said it was because he “betrayed the Samurai spirit of self-sacrifice,” but in Japan they felt he had shamed them in the eyes of the world.

He even had letters in the press calling for him to commit suicide. He was eventually reemployed by the Ministry, as he was too valuable to lose, and continued to work for it until his death in 1939 at the age of 68.

While some would say that Hosono’s shaming was a uniquely Japanese reaction, others point to a similar reaction in Britain, with Joseph Ismay, who was the managing director of the company who owned the Titanic.

He also survived its sinking, and like Masabumi Hosono, was fiercely criticized for escaping the ship when women and children were still on-board, and spent the rest of his life living with the shame and public humiliation of having survived….although, maybe Ismay deserved the criticism a little more than Hosono.