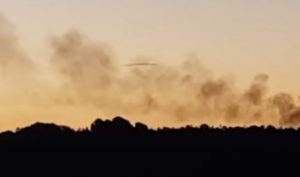 Residents of the Australian city of Tinaru, Queensland, on April 25 of this year witnessed a very unusual phenomenon.

A local family rested on the shore of an artificial water reservoir when they suddenly noticed a large object in the sunset sky, resembling a kind of dark arc.

The alleged anomaly hovered above the trees on the opposite bank of the lake, and behind it was smoke from a nearby plant. However, this UFO was clearly not smoke, because it was stationary and much denser.

Some users of the Internet seriously considered that the aircraft of representatives of an extraterrestrial civilization visited Tinaru, although in a very peculiar form, almost unique.

However, if it is not aliens, then some kind of failure in the matrix or a breakthrough into a parallel world. This mysterious object cannot be called a cloud of smoke.

But skeptics think that this is just smoke, for some reason “stuck” in the sky.