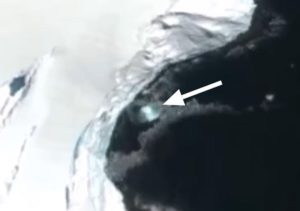 An enthusiastic alien researcher claims to have discovered what appears to be a “stranded UFO” crashed off the coast of Antarctica from a Google Earth scan.

The unexpected finding was posted on Twitter with a brief caption claiming that the disc-shaped object was “found in Graham Land” on the Antarctic Peninsula.

As the footage zooms into the coastline, the image shows a silver “flying saucer” on the surface of the sea.

This UFO could be brushed away as natural rock, but he believed that the object looked like a disc in snow and ice.

Graham Land discovery was made by Argentinian researcher Marcelo Irazusta and published on his YouTube channel “Planeta Snakedos”. He clarified that the image was taken from NASA and was published on Google Earth.

He commented: “It can be very deceptive with a block of ice, I do not discuss it, but from my point of view, the UFO is totally metallic, not ice.”

What is on the shore? Just block of ice? Something from ancient history? Or maybe this is a real alien spacecraft?