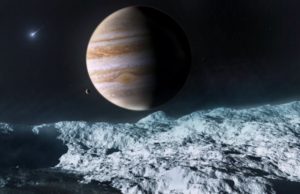 Today almost everyone knows that Jupiter has a moon, which is called Europa. It is completely covered with ice, the layer of which reaches 24 kilometers.

Scientists suggest that under it, liquid water may be present. If so, then the satellite becomes a potentially habitable object.

She believes that under the ice of Europa there may be an alien life that somehow resembles octopuses. Moreover, this form of life can be much more complicated.

“When it comes to the prospects of life beyond Earth, it’s almost a racing certainty that there’s life beneath the ice on Europa” Grady said.

Monica also claims that life could be hiding in deep caves on Mars as these underground sanctuaries are sheltered from dangerous radiation.

“But I think we’ve got a better chance of having slightly higher forms of life on Europa, perhaps similar to the intelligence of an octopus.”

Grady also said the environmental conditions which caused the evolution of life on Earth are ‘highly likely’ to be found in other star systems.

Other scientists have conducted additional research on how life could have spread in space as a result of impacts from asteroids and other space objects.

Some of the results were very favorable so that life could spread within the solar system. In the case of Europe, the influence of ordinary microorganisms can be quite sufficient for the development of life.

It is worth noting that Grady believes that life can exist in other parts of the galaxy, because humanity today has studied only a small part of it.