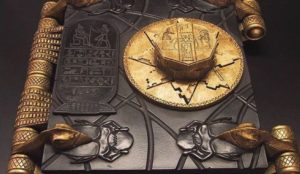 The Book of the Dead is not a book about death. It is a book about life that conquered death. Strangely enough but such effective title that has become as known as pyramids, mummies and papyrus does not coincide with the content and the idea of the book at all.

Moreover, its meaning is opposite to its original title. The Book of the Dead is just a part of the problem…

It has been a long time since t6he Europeans started thinking of the Ancient Egypt as of the land of dead where living people worshiped death and prepared to die long beforehand.

Unfortunately, this old deception is present even in the modern mass culture (consider, The Mummy movie, for instance). It can be partly explained by the sources of our knowledge – more than 95 percent of the monuments of the Ancient Egypt are found in tombs. Imagine what will a historian of the future think of our civilization if we leave so many necropolises?

At the same time, a non-expert will not associate all the Egyptian monuments with the world of the dead. Thus, for instance, the walls of some civilians’ tombs show different aspects of life on Nile: agriculture, crafts, hunting, fishing etc. And they are shown rather gaily! Humorous pictures are not an exception here.

By the way, love for joke distinguished Egyptians from all other Arabs. It is here that the national character – not only anthropological type – is well-preserved. Unfortunately, humor of ancient Egyptians remains a closed topic for Egyptologists. 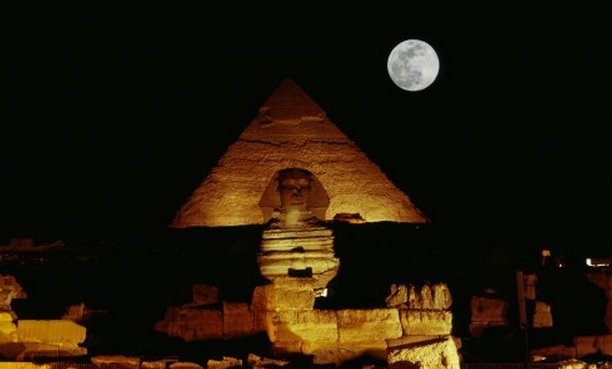 It is not that the scientists are not interested – the problem is very difficult to solve. Laughter that was heard long time ago is like a smell that is elusive. It differs depending on epoch and nation and even on the level of the society.

If a culture is based on individuality every person’s humor is peculiar. Even humor that is present in texts (such as play on words common among the Egyptian scriveners) is hard to grasp. Humor requires a historian to go deep into amorphous and fragile zone of mentality.

It is worthy of note that it is in the time of the New Kingdom (16-11 centuries B.C.), which was the most important period in the history of The Book; the number of humorous texts and pictures is increasing dramatically.

A mythological tale “The Battle of Horus and Seth” where main Egyptian gods are humiliated dates back to this period of Egyptian history. Seth is presented here as stupid hunk who dares insult the king of all gods Amon-Re.

The title The Book of the Dead became associated with funerary texts although Egyptologists know very well that this is just a conventional title. The original title of the back can be translated as The Book of Coming Forth by Day. 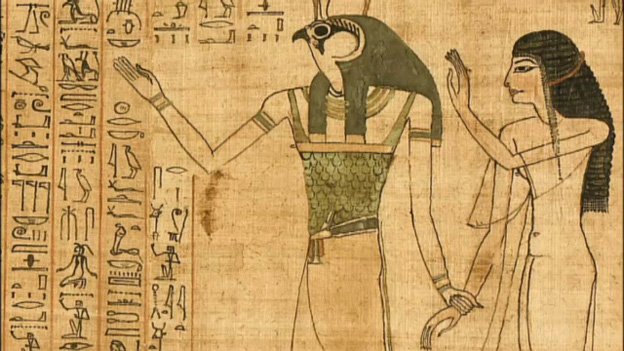 It represents the basic meaning of this amazing text which is helping the dead to overcome all the dangers of the other world, go through the post-mortem judgment and to come back on the sunny barque of Re, that is to arise from the dead, or to be renewed as Egyptians used to say.

The most important is to conquer the enemy – death – in order to live spiritually and sensually in a rejuvenated ever-young body in the land of eternal beauty together with dear ones. This book is a story about overcoming death and the ways to overcome it. One of the most significant chapters of the book illustrates the idea of post-mortem retribution.

The Book of the Deaf played a very important role in culture and religion of the ancient Egyptians. It was not a funerary ritual, a prayer book or a collection of myths. Neither of those. It is hard to find a proper name for this amazing and extremely important written masterpiece.

It would be correct to say that it was everything for the Egyptians. The literature of such world religions as Christianity, Buddhism, or Islam does not know any such work that could be compared with the Book of the Dead.

It seems to be the quintessence of all spiritual, religious and worldview ideas of the ancient culture that had its own unique way in history (that lasted more then 3000 years!) and played a titanic role in the world culture.

Before the Book of the Dead (its oldest scrolls date back to the 17th-16th centuries B.C.) there was a powerful tradition of funeral literature – the Pyramid Texts, which were written at the end of the Old Kingdom (24th- 22nd centuries B.C.) and Sarcophagus Texts (21st – 18th centuries B.C.).

The Book may seem strange to us for it is a collection of practical sayings that were written in different periods of time and contains vague dialogues, magic formulas and texts that surprise with their vivid imagination and spiritual insight. 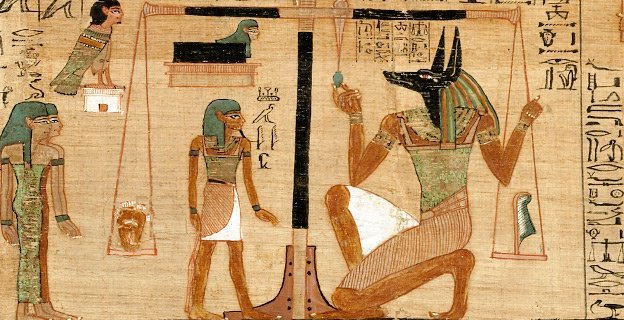 Egyptians considered a fragile papyrus scroll to be almost the last hope for passing through the horrible world of snakes, scorpions, ghosts, blazing lakes and magical crystals. This world dates back to the immemorial times of primal initiation ceremonies that were well-preserved for thousands of years.

Egyptians considered their writing a sacred speech and thought it was invented by the Thoth, who was the god of wisdom and knowledge. The scrolls of sacred books were called the souls of the god Re.

The divine origin of the Book of the Dead was obvious and as any divine object it was surrounded by mystery. One of its chapters claims that the book is more useful than any ceremonies and it should be hidden from the eyes of man.

This is how Egyptians themselves treated this sacred masterpiece. It is impossible to grasp the sense and spirit of their culture without understanding their own attitude towards this book. This book contains too many notions and beliefs to be underestimated.

The War for the Planet Between Humans and Neanderthals Lasted 100,000 Years