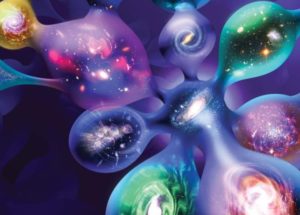 As a result of many years of research, Japanese scientists have been able to describe a mechanism that can confirm the existence of “neighboring” universes. This research was carried out by the staff of the IPMU.

Scientists have presented their own scenario for the formation of black holes in the Universe. In their opinion, the holes could have appeared before the birth of galaxies and stars, reports Phys.org.

Researchers believe that the very first black holes could have arisen from the so-called “infant universes”, which formed during the expansion of the main universe. Small universes under the impressive growing energy of the main Universe begin to rapidly collapse, turning into black holes.

If the “infant universe” is large enough, then the external observer sees it only as a black hole. The inner observer will see it as an endless expanding space.

According to astronomers, primordial black holes can be detected using the Hyper Suprime-Cam used on the Subaru Hawaiian telescope. Scientists were able to record an increase in the brightness of a star that passed next to the black hole.

The mass of a black hole can be calculated based on the degree of change in the brightness of a nearby star. For example, recently astronomers were able to detect a small black hole, the mass of which is close to the mass of the moon. According to scientists, this indirectly confirms their hypothesis about the multiverse.

An interesting hypothesis, what if we ourselves are inside one of these black holes and believe that we live inside a continuously expanding universe?