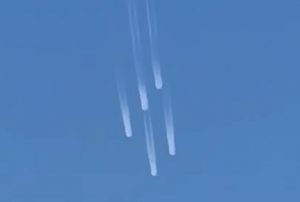 On December 15, 2022, at about 2 pm, five strange objects were filmed in the sky over the town of Boise, Idaho. Mysterious objects in the video hardly move or move very slowly.

In appearance, it resembles as if a certain space object fell apart into five parts at once and they fell down simultaneously. But either this happened at a very high altitude, so that it is not noticeable that they are descending, or they did not fall at all, but simply hovered in place.

In addition, no accidents have been reported in the area, including SpaceX test launches.

It also differs from drones in that they leave no trail of smoke or condensation.

According to one version, these are some kind of classified aircraft, which makes sense, since there are two US Air Force bases in the Boise area – the Air National Guard Base and the Mountain Home Air Force Base.

Methane found in the atmosphere of Mars: it can be produced by living organisms