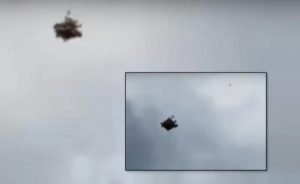 The testimony says the object rotated on its own and had very strange bulges around its circumference. Which periodically went out and returned.

A witness who realized that this mysterious object did not have the characteristics of an aircraft, unmanned aerial vehicle, or other conventional ground plane recorded a short video on an iPhone.

Image analysis by ufologists reveals an incredible object or what is called a “UFO cluster”.

A group of merged objects chased by other black spherical objects.

Obviously, it would be somewhat ridiculous to mistake these objects for balloons. Because the balloons are flying up, and these are moving horizontally.