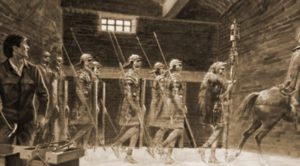 In many different countries, there have been stories of phantom armies haunting battlefield sites throughout history.

For example, in 490 B.C. a battle was fought near Athens, Greece, between the Athenians and the Persians, and for years thereafter, visitors to the site would hear the sounds of the battle and/or see the ghosts of the warriors who had fought there.

In most cases reports of phantom armies occur in the first few months or years after a battle has taken place. Sometimes, however, they occur many years later.

In 685 ad, one of the worst battles of the Dark Ages in Britain was fought near Nechanesmere, Scotland. The land was under invasion by the Northumbrians. The battle did not go well for the defending Picts. Most of them were slaughtered, along with their king, Brude mac Beli, and his entire royal bodyguard. The few survivors fled.

Behind them they left a landscape littered with the dead, the moaning dying, and the screaming wounded. There were no guns in those days. Soldiers were hacked to death with swords and knives, shot with arrows, and smashed with spiked maces.

Dying often took a long and agonizing time. Burying the dead took even longer. In 1950 a case was investigated by the Society for Psychical Research (SPR) after a woman in Scotland reported seeing ghostly figures in tights and tunics, carrying torches, searching the ground in a field. Eventually the SPR discovered that the site had been the location of a battle in A.D. 685 between Scottish Picts and Northumbrians.

The war marked a turning point for the destiny of a nation. The impact of it remains in the collective memory of its people and is written in the psychic landscape. Battles were fought in England, Scotland, and Ireland.

One of the bloodiest battles took place at Antietam Creek near Sharpsburg, Maryland, on September 17, 1862. It was a stalemate, though it did not go well for the North. More people died in that one day of fighting than on any other day during the entire war.

Estimates are 3,754 dead, 17,292 wounded, and 1,763 missing. Many of the dead met their end in a single place—Bloody Lane. The lane was actually a sunken road in the earth where Union soldiers were easily picked off.

Today Bloody Lane gives off a feeling of dread to the many visitors who come to the site. Phantom cries of battle are heard. At Burnside Bridge where many dead were buried, there are still sounds of phantom drums. Strange blue lights are seen at night. They are believed to be the ghost campfires of ghost soldiers. 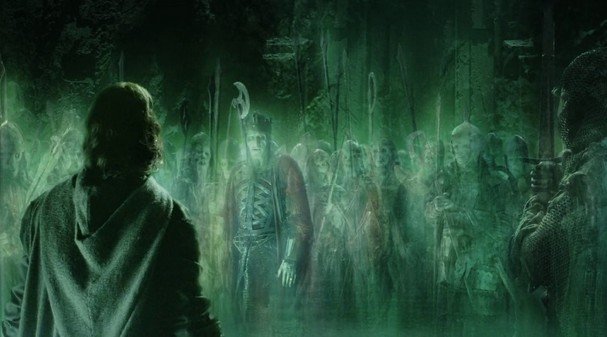 Similar hauntings occur at other Civil War battlefields, but none surpass Gettysburg, Pennsylvania, in activity. Gettysburg is probably one of the most haunted battle sites in the world. On July 1–3, 1863, marked the turning point of the Civil War.

At Gettysburg the North won a decisive victory, gaining an upper hand that lasted until the surrender of the South nearly two years later. Approximately 165,000 men fought, and there were 50,000 casualties— more than the residents of the entire town of Gettysburg.

The battle is especially known for Pickett’s Charge, named after General George Pickett, one of the commanders who led an assault of 12,000 Confederate troops across a huge, open expanse of ground. For three days the armies shifted in brutal fighting across land filled with rocks and small hills.

In places where intense fighting occurred, there were so many bodies that soldiers could scarcely walk and touch ground. Instead, they walked across corpses. Blood drenched the rocks and the soil. No wonder that entire battles become ghosts! Amazingly only one civilian was killed, even though the town was filled with gunfire.

Jenny Wade, a young woman, was baking bread in the kitchen of her sister’s home when a bullet tore through the wall and pierced her in the heart. She died instantly. The house, now a museum, is haunted, though opinions are divided as to whether Jenny herself is still there.

Over a decade after World War II ended, people on a South Pacific island where Allied and Japanese forces battled in 1944 would see the ghost of a Japanese soldier manning the remnants of a Japanese antiaircraft gun every night at midnight.

Of all events in history, battles fought in wars rank among the most traumatic. Battles are concentrated periods of mass killing. They are filled with emotions, pain, and death. The suffering they cause extends far beyond the battlefields themselves. Lives, families, communities, and even nations are ripped apart. There is no certain explanation why battles continue in phantom form.

Paranormal researchers believe that the intensity of the emotional pain, physical pain, and violent death—especially on a large scale—leaves a powerful imprint in psychic space, an invisible realm around us. The battles end in real time, but continue and repeat in the invisible realm.

A haunting occurs when people are able to experience this invisible realm, even if briefly. Some researchers also think that some of the souls of dead soldiers become stuck, or earthbound. They linger at the place where they died, not knowing where to go or even how much time passes by.

People who believe that such sightings are real have theorized that witnesses are experiencing retrocognition, an ability to see images from the past.

Others have suggested that the traumatic nature of warfare causes people who have died during a battle to leave “psychic residue” of themselves at the site of their deaths, and this residue is responsible for the images. Skeptics, however, say that such images are hallucinations or fantasies.