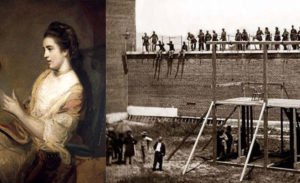 Though she’s been dead for almost 200 years, Charleston is in love Lavina (sometimes Lavinia) Fisher. Or rather the legend of Lavina Fisher.

According to legend, Lavina had a way with men, particularly her husband John. John and Lavina ran the Six Mile House, located as stated, six miles north of Charleston. Travelers heading in and out of Charleston would stop over for refreshments or a room for the evening, reports gothichorrorstories.com.

Lavina loved to bring the men into her parlor for tea and conversation. The particularly tasty ones – as Lavina had a taste for gold – were the rich ones, who got an extra dose for their tea. A lethal one.

As the poison would take hold, Lavina and John would help the suddenly weary traveler to a bed in the back. Once he was out, John would spring a lever, a trapdoor was sprung and the bed, occupant and all would fall into a pit below the house. If the poison and the fall didn’t kill him, John would finish him off, relieve the corpse of all valuables, put the bed back and dispose of the body.

One evening a fellow by the name of John Peoples stopped over. Lavina took him to her parlor and offered him tea. Peoples didn’t particularly care for tea, but was a kind soul, so when Lavina had her back turned, he poured the contents of the cup into a nearby plant.

Over the course of the conversation, Lavina started giving Peoples the willies. The presence and quirky behavior of John didn’t particularly help. Wanting to get away from the couple, John Peoples feigned tiredness, made his excuses and found his way to his bedroom.

Glad to be out of the company of the Fishers, John found he wasn’t tired enough for bed, so set himself up in a chair by the door. As he sat there, the bed collapsed, falling into the pit. Startled, he leapt from the chair and threw open the door of his bedroom to summon help.

Standing there was a very confused looking John Fisher, with Lavina behind him, startled to see Peoples so active. Freaked, John Peoples slammed the door closed and bolted out the window, where he ran all the way to Charleston and reported what had happened to the police. Who of course investigated, noticed several reports of missing travelers along that stretch of road, and located the bodies of numerous victims.

And I might add, making Lavina Fisher the first female serial killer in United States history.

See? A great story – one that gentile Charleston can trot out to tourists, particularly when escorting them around the gloomy and fascinating Unitarian Cemetery, where her ghost has been reported.

But too good to be true. What really happened is this …

Charleston police had a number of reports about robberies out along the highway by Six Mile House. Charleston lived and breathed commerce, and the highways were of vital importance. So they took highway robbery seriously. The noose.

First the police went to Five Mile House, obviously located one mile from John and Lavina’s inn. They burned that, then came to Six Mile House and evicted the Fishers. In their place, they left a fellow by the name of Dave Ross.

The next day a gang shows up at the inn, who drag Ross outside where he sees Lavina. Oh how sweet she must have looked, and Ross looked to her for help. Lavina instead choked Ross, then rammed his face through a window.

A couple hours later, the gang accosted the aforementioned John Peoples on the road and relieved him of about $40. Peoples went to the police and reported the crime, which along with the testimony of Ross was enough to get Lavina and John Fisher hauled before the authorities. Charged with highway robbery, they were sentenced to be hung and sent to Charleston’s Old Jail.

Since they were married, they were kept in the upper floors in a room together, from which they nearly escaped. John in fact, made it outside of the jail, but Lavina couldn’t get out, so the loyal John allowed himself to be recaptured.

In South Carolina at the time, married women automatically escaped the death penalty, and Lavina had hoped to escape the gallows by that. The judge squashed that plan however, telling her that they’d hang her husband first, which would make her a widow and eligible to hang.

John mounted the gallows peacefully enough, but his loyalty to Lavina broke when he suddenly proclaimed his innocence, then just as suddenly asked for forgiveness for his crimes and that was it for John.

It’s said that Lavina wore a wedding dress to her hanging, hoping her beauty and the pitifulness of her state would cause some man in the crowd to swoon, and marry her at the last moment. Evidently, when she realized that wasn’t going to happen, her mood soured. They had to drag her up on the gallows, kicking and screaming. According on one historian at the time:

“She stamped in rage and swore with all the vehemence of her amazing vocabulary, calling down damnation … The crowd stood shocked into silence, while she cut short one curse with another and ended with a volley of shrieks.”

“If you have a message you want to send to hell, give it to me—I’ll carry it, Lavina said,” and a legend was born.

And no, it’s not Lavina Fisher who is seen roaming the tombstones at Charleston’s Unitarian Church. Her and her husband were buried in potter’s field near the Old Jail. Which by the way, is another place where Lavina’s spirit is thought to haunt.

Lavina’s ghost, and several other odd experiences have been reported in her cell at the Old Jail, including sightings of her apparition from outside, through the window.

A lot of strange things are seen on the streets of Charleston. With the Spanish moss hanging from the oaks, and the humidity of the summer thickening the air, it’s the story that counts most, to while away the praline sweet minutes.

John Lee – The Man They Could Not Hang