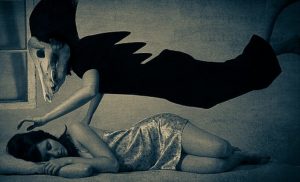 The sun has set, and after a long day you lay down for a good night’s sleep. Some time later you wake up. There is an unseen source of pressure concentrated on your chest. With every breath, the weight gradually increases and your fear swells.

Your eyes search, darting from left to right, as a shadow emerges from a dark corner of your room. The phantom’s shape resembles that of a human wearing a black cloak; your heart beats faster and faster as the dark mass comes closer.

A purple hue emanates from around the creature and a noise that sounds like rushing air fills your ears. The sound becomes deafening. Instinctively the flight response hits and your body attempts to move away from danger, but you are paralyzed. You move just your eyes to see, and suddenly the menacing shadowy figure is next to the bed.

You try to break free, but to no avail. The unimaginable happens – this form rises from the floor and hovers over you; the weight becomes almost unbearable. A morbidly-formed face appears from the depths of the shadow’s head. Fear takes over and frantically you attempt to scream again and again, but no sound escapes your lips.

The shadow hangs over you for an eternity, then disappears. The room falls silent, and you find that you can breathe and move again. Everything in your room is as it should be; the invader left no physical trace of the encounter. Your limbs have gone limp, there is no strength left in you. Remarkably your eyes seem to close on their own and you lay down, exhausted from the ordeal, and succumb to sleep.

This may sound extraordinary and even far fetched, but the events depicted above are very real – at least to the people who experience them every day. This phenomena is called a Hag Attack.

Now you are asking yourself “what kind of entity can do such a thing?” The answer to that question, dear readers, would be, a “psychic vampire”. This term is a bit broad though. A few different types of energy feeding vampires are clumped together under one title.

To clarify – a physic vampire can be a living person who is fully aware of their actions, or someone that is completely unaware of what they are doing. And then there is the non-living ethereal psychic vampire, which we will cover a little later.

Individuals who are unintentionally feeding on aura energy are usually close friends or relatives of their victims. Attacks of this manner occur when someone close to the victim becomes ill, or is unable to replenish their own energies because of some biological abnormality.

Many states that the face that first appears to them is that of a loved one before morphing into something horrifying. A theoretical explanation for this is that fear causes a severe and instant flare of an individual’s aura, thus releasing the sustenance (aura energy) a psychic vampire is after. These are vampires who consciously do not realize they are doing it.

The other kind of psychic vampire – the non-living variety – is said to be the most dangerous, mainly because these entities theoretically “need” to consume living energy in order to sustain their ethereal bodies, and have been known to attack the same victims on multiple occasions. Some accounts specify multiple events in a single month.

If a vampire wants to attack, he may attack any time you are sleeping or otherwise vulnerable, either evening hours, or daytime hours. If you suspect vampiric activity, you can protect yourself by purifying your sleeping area, meditating and using simple ritual magick. What means will be most effective depends on the type of vampire. Research should be done to achieve the best results.

It should also be noted that there are physiological phenomena called “sleep paralysis” that, according to scientists, can mimic two or more of the common traits associated with a hag attack. Sleep paralysis is caused by suddenly waking up from REM (Rapid Eye Movement) sleep.

Physicians speculate that low levels of melatonin in the brain affect the neurons ability to send signals to the body’s skeletal muscles, thus making you temporarily paralyzed. Sleep paralysis may also cause hallucinations called “night terrors” that appear to be very lucid events and in some instances can be mistaken for paranormal experiences.

Unfortunately, the exact physiology of sleep paralysis is still unknown and scientists have yet to lay down a concrete cause or specific catalog of effects for this condition. None the less, this physiological phenomena should be considered when examining events of a possible hag attack.

Unfortunately, science can neither confirm nor deny the existence of any type of psychic vampire, or if psychic vampirism is even possible. And for us the answer may be out of reach, at least until the scientific community’s current paradigm shifts in a more favorable direction.

There are researchers currently attempting to find a plausible explanation for psychic phenomena, including vampyrism. However, until there is a breakthrough in favor of or against the existence of psychic vampires we will have to watch and wait for what may come from the corners of our rooms.