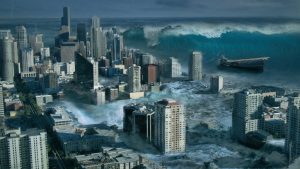 A new study by Science Advances shows that climate change will lead to massive flooding in California (USA) in the next four decades. Experts say that no one living in these places today has faced such a scale of disaster.

UCLA climate scientist Daniel Swain describes the event as “very severe flooding in the region that could lead to catastrophic consequences.” He said the mega-flooding will be similar to the 1,000-year-old flash floods seen this summer in the St. Louis and Kentucky area. But this time there will be even greater coverage of the territory, for example, all of California will suffer.

Such large-scale flooding, which experts say will turn the lowlands of California into a “vast inland sea”, may have previously occurred in the state once. But experts say climate change is increasing the likelihood of these catastrophic disasters.

California is naturally prone to flooding from atmospheric rivers. Major floods have happened here before, but climate change is exacerbating them, which could affect millions of people.

The study says that atmospheric rivers can exist for weeks.

A flood capable of inundating this valley could be the most costly geophysical disaster to date, causing more than $1 trillion in damage and devastating low-lying areas of the state.

This has happened before. It will happen again, but it will be worse, scientists warn.

More than 150 years ago, a powerful series of atmospheric rivers flooded the Golden State, causing one of the most exceptional floods in history after a drought that left the West scorched for decades. Settlements were destroyed in a matter of minutes.

According to the study, the winter of 1861-1862 and flooding turned the San Joaquin and Sacramento valleys into “a temporary but vast inland sea.” In some areas, the water reached 10 meters, which led to the destruction of infrastructure, agricultural land and cities.