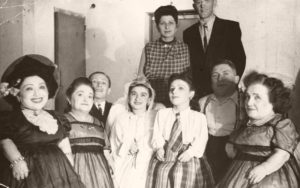 Of all the trials and tribulations endured by those born unique, few equal the horrors chronicled by Elizabeth Ovitz as she and her siblings were tortured and experimented upon by the infamous Nazi “Angel of Death” Josef Mengele.

The Ovitz family were Transylvanian Jews. Their patriarch, Shimshon Isaac Ovitz, was a respected Rabbi and dwarf. The majority of his children, Elizabeth included, inherited his pseudoachondroplasia dwarfism and upon his sudden death his widow reasoned that the seven stunted Ovitz siblings could secure a financially sound career as a traveling music troupe. In relatively short order, the siblings formed the ‘Jazz Band of Lilliput’ and began touring Central Europe.

By 1942, despite the unstable status of Central Europe of the march of the Nazi army, the Ovitz family managed to continue touring by concealing their Jewish identities. Elizabeth was able to marry in May of that same year to a young theatre manager named Yoshko Moskovitz.

The couple was forced to split just ten days after their marriage when Yoshko was drafted into a labour battalion. For another two years, the Ovitz family continued to tour, unfortunately they were in Hungary in March of 1944 when German troops occupied the country. On May 17 the Ovitz family was captured, loaded into a boxcar and sent off to Auschwitz.

Elizabeth recalled the first time she set eyes on Dr. Mengele as he stood on the platform dividing the new arrivals into those to be executed immediately and those who were to suffer the camp incarceration.

Mengele was a deceptively handsome man and his eyes lit up when he saw the tiny Ovitz family. Mengele had previously tortured, experimented upon and dissected dozens of twin siblings for no reason other than to document the similarities of their internal organs and in the Ovitz family Mengele saw the ultimate test subjects.

In fact, Elizabeth quoted Mengele as enthusiastically declaring: ‘Now I will have work for the next twenty years; now science will have an interesting subject to consider.’

At Auschwitz Elizabeth and her family were segregated and subjected to all manner of frenetic experimentation. As Elizabeth would write:

‘The most frightful experiments of all were the gynecological experiments. They tied us to the table and the systematic torture began. They injected things into our uterus, extracted blood, dug into us, pierced us and removed samples. It is impossible to put into words the intolerable pain that we suffered, which continued for many days after the experiments ceased.’

The gynecological experimentation was so severe that even the doctors assisting the procedures eventually refused to continue out of pity, whilst citing the very real possibility that the family would not be able to survive further invasive procedure. Mengele relented as he did not want to risk the lives of his favourite lab rats. Instead, he concocted and implemented new sadistic experiments.

‘They extracted fluid from our spinal. The hair extraction began again and when we were ready to collapse, they began painful tests on the brain, nose, mouth, and hand region.

All stages were fully documented with illustrations. It may be noted, ironically, that we were among the only ones in the world whose torture was premeditated and ‘scientifically’ documented for the sake of future generations.”

In addition, Mengele’s physicians also painfully extracted bone marrow and pulled out teeth to find signs of hereditary disease and blinded members of the family with chemical drops.

Not content to keep his prized subject hidden within the confines of his laboratory, Mengele displayed the Ovitz family, stripped nude, to groups of senior Nazis while lecturing on their inferior genetics.

He also created a film for Adolf Hitler’s amusement staring the Ovitz family. The Ovitz family sang German songs when ordered to do so out of terror. Shortly before the request they had witnessed two newcomer dwarfs being killed and boiled so their bones could be exhibited in a Nazi museum.

All told, the Ovitz family endured seven months under the torturous hand of Mengele.

Auschwitz was liberated on January 27, 1945. Elizabeth and her family were rescued by Soviet troops from what was likely certain death. Just two days previous to the liberation, Mengele approached Elizabeth with a collection of glass eyes and attempted to match her shade.

During the following four years the family toured the wreckage of Eastern and Central Europe. They choreographed and performed a new routine in remembrance of their experience. Each night Elizabeth, partnered by one of her brothers, would dance the part of Life to his Death in what they called the Totentanz.

In 1949 the family emigrated to Israel and Elizabeth died in Haifa in 1992.

Josef Mengele was never captured or tried for his crimes. He died on a beach in Brazil in 1979.