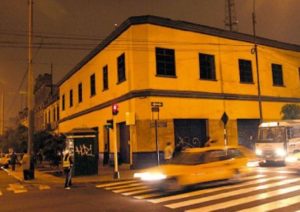 There is a strange, bright yellow house in Lima, Peru that is said to be cursed. The name of the house is “La Casa Matusita” and according to legend, a group of people met a grisly end on the 2nd floor of the old building.

The man was ill-tempered and treated his servants very badly, constantly mistreating and insulting them. The servants were filled with hatred for the man and vowed to someday get their revenge. They came up with a plan to publicly embarrass their employer.

One day, the old man was holding a dinner party. When his guests arrived and were seated in the dining room, the servants decided to take their revenge. They had obtained illegal hallucinogenic drugs (LSD) and put them in the food they were serving to the man and his guests.

Then the servants walked out, quietly locking the dining room door behind them. They retired to the kitchen to await the results of their plan. After about 15 minutes, they heard angry voices and the sound of plates smashing. They chuckled to themselves. This was followed by violent yells and blood-curdling screams. The servants began to get worried.

After the noises had died down, the butler and the cook opened the door of the dining room and were horrified by the gruesome scene they discovered inside. The walls and ceiling were splattered with blood. On the floor lay mangled bodies and body parts – eyes, hands, internal organs, severed heads. The faces of the guests were twisted masks of hate and terror.

Each and every guest at the dinner party, including the old man, had met a brutal and terrifying end. Driven insane by the hallucinogenic drugs, the guests had murdered each other in the most appalling ways imaginable.

The sight of so much savagery caused the servants to lose their minds. Horrified by the massacre they had caused and fearing they would be executed by the law, the servants took their own lives, hanging themselves from the ceiling of the dining room.

Ever since then, the yellow house in Peru had a reputation for being haunted. Most people were afraid to go near the place. It is said that the house began to fall to ruin until it was purchased years later by a property developer.

Later, a Japanese family moved into the house. They were completely unaware of the history of the old building and of its fearsome reputation. The night they moved in, the husband took a knife and murdered his entire family before killing himself.

After that, the house lay vacant for many years until a local priest was asked to perform an exorcism there. The owners wanted the house to be cleansed so that it could be sold. The priest entered the first floor with no problem. It was when he set foot on the second floor had a panic attack that resulted in his death.

Another of the best known cases is that of Humberto Vera Vilchez, aIn the 1960s, a television host made a bet live on air, saying that he would be able to spend seven nights alone inside the house. He managed to stay one night, and the next morning, he was found lying outside on the pavement. He had lost his mind and had to be confined to a mental asylum. He was never heard from again.

It is said that from time to time, ghostly screams and yells can be heard coming from La Casa Matusita. Some people have even seen ghostly figures lurking in the 2nd floor windows. Today, the 1st floor of the yellow house is rented out to a business.

The 2nd floor is kept unoccupied and securely locked. According to legend, if a group of people goes to stay the night on the 2nd floor of the yellow house, they will go insane during the night and slaughter each other, re-enacting the terrible events that happened there years before.