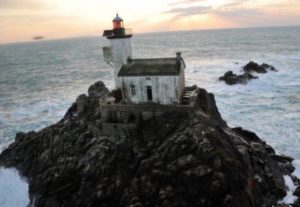 Would you spend two months in a lighthouse with a reputation for driving people insane? One man took on the challenge to raise awareness for Tevennec Lighthouse in hopes of restoring it but after one failed attempt, not sure if he has completed his task much less kept his sanity while doing it.

Tevennec Lighthouse is located in the Raz de Sein strait off the coast of Brittany, France. It was built in 1871 and first lit in 1875.

During the Napoleonic Wars, the French ship Séduisant was wrecked there, resulting in the deaths of hundreds of men. The lighthouse was classified as the fourth category, requiring a single keeper and a service period of a year. A series of 23 keepers lived at the light until automation.

According to legend, the first lighthouse keeper, Henri Guezennec, was driven insane by ghostly voices demanding his departure. Allegedly Guezennec’s replacement, Minou, had a similar experience.

The French government then reclassified Tévennec as a two-man lighthouse however applications were rare. In 1897 the government began recruiting married couples to keep the lighthouse. Some unexplained deaths occurred.

The man found his father dead in his bed with a slit throat from a shaving razor. There are other stories of a child dying there and a keeper who supposedly died from falling on a knife. A priest was even called in to exorcise the property but it may have been a failure.

The last residing keeper’s wife was in the middle of giving birth when a wall was destroyed by waves.

It was decided in 1910, to make the lighthouse fully automated. Twenty-three keepers have tended to it but no one has lived there since. With a mythical grim reaper allegedly living there and multiple deaths, it’s not surprising visitors have had ghost sightings.