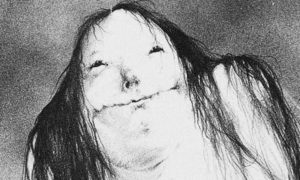 One rainy night in April 2007, a 17-year-old girl named Amanda was startled from her sleep by strange sounds in the bedroom of her house on Huyton’s Dinas Lane. The young Goth sat up in bed and looked around the darkened room, which seemed even darker because Amanda had recently painted the walls black.

She could see no one, but she had heard what sounded like muttering and had definitely heard a certain creak near the right side of her bed, made by someone standing on a loose bare floorboard there. Amanda winced with a slight pain in her left canine tooth. It had been throbbing all day, and so she had tried to sleep off the toothache by going to bed earlier than normal, at 10pm.

Once the teenager was satisfied that there was no one lurking in her bedroom (which she called her “Sanctum”) she cocooned the duvet around her petite body and drifted off into the realms of dreams. Even in her dreams, Amanda felt her toothache, and she dreamt she was deep in the heart of a forest, being pursued by a hunchbacked old woman all in black with grey hair tied up in a bun.

The old woman wielded a pair of pincers, and Amanda knew that the elderly misshapen woman wanted to pull out her bad tooth. Amanda was naked, and when she ran off away from the old woman, she moved in slow motion.

Every now and then, Amanda would see grotesque faces peering from behind trees at her in the wood, and at one point in the dream, one of these unearthly figures jumped out on Amanda and she awoke with a yelp, only to be confronted by something much more terrifying which has, so far, defied a rational explanation.

An old woman with a heavily lined face, hooked nose, dark-ringed eyes and a pointed chin, was leaning over Amanda’s bed, with a pair of pincers in her hand, and a blood smeared tooth was held in those pincers. Amanda experienced an agonising pain in her mouth.

She ran the tip of her tongue round her mouth and tasted salty blood – and the hole in her swollen gum where the left canine had been wrenched out. The old woman, who was hunchbacked, let out a hissing chuckle, and Amanda was so upset and distressed by the pain in her mouth, she slapped the old hag in the face, and the elderly weird stranger let out a yelp, then gave a wide-eyed look of astonishment at the teenager.

‘Mum!’ Amanda screamed. ‘Dad!’ she also shouted as she got out of her bed and began throwing objects at the sinister tooth-snatcher. An old-fashioned alarm clock was the first missile aimed at the wizened intruder, and it bounced off her head.

The old woman screamed something and then ran into the corner of the black-walled room, to a gap between the wall and the wardrobe, and at that moment the bedroom door burst open and Amanda’s father came in and switched the light on.

Amanda told her Dad what had happened and urged him to look in the niche between the wall and wardrobe, and he did, rather gingerly, but saw nobody there. ‘You obviously had a nightmare Mandy,’ he told his daughter, but Amanda said she certainly hadn’t – and she opened her mouth wide and showed her father the missing tooth.

Amanda’s mother entered the bedroom and when she heard the eerie story, she suggested that Amanda had perhaps pulled her aching tooth out in her sleep. Amanda was furious at the suggestion. ‘I didn’t!’ she protested, and she pointed out the bloodstains on the duvet. Amanda’s father searched the floor, but there was no sign of the canine tooth. It was never found, and a few week later, Amanda had a false canine implanted in her gum by the dentist.

What Amanda and her parents did not know, was that there had been similar incidents of tooth-snatching in Huyton stretching back to the 1930s at least, and in 1978, in Lincombe Road – the neighboring road to Dinas Road, there were two strange cases of nocturnal tooth-theft. In March 1978, a woman awoke one night to find a white-haired old woman in a long black robe, leaning over the bed of her 4-year-old daughter.

The child was crying, and when the mother shouted out to the figure, it vanished. When the light was switched on, the four-year-old girl was sobbing with her hand to her mouth. Her front teeth had gone. Centuries ago, some witches stole the milk-teeth of infants to use in spells. In September of that same year, in the same road, the visiting grandfather of a family had a bit too much to drink at his grandson’s 21st birthday, and retired to the guest bedroom at almost three in the morning.

The old man, named Jeffrey, had a single tooth in his head, and was often mocked for this. His late wife had repeatedly asked him to have the tooth pulled and to get a set of dentures, but Jeffrey was terrified of the dentist, and needles in particular. Jeffrey was so drunk, he fell asleep on the bed without even undressing and settled into a welcoming sleep, but around half-past three he awoke with the sensation of an icy hand on his chest and cold bony fingers in his mouth, pulling at his single tooth.

As he squinted into the darkness, he saw a white-haired woman, and she was engrossed in pulling at his tooth. Jeffrey tried to get up, but the old woman seemed to have superhuman strength, and she pinned him down on the bed with her left hand as her right hand grappled with the grand-dad’s tooth.

Jeffrey tried to scream but his call for help was muffled by the old woman’s fingers in his mouth, and he felt a sharp agonising pain as he heard his tooth being wrenched from his jawbone. As the tooth was giving way, he felt the old woman jump up and down on him, and she squealed and grinned to reveal that she herself had only one tooth.

Jeffrey spat in the old woman’s face, and saw that his spittle, as it impacted into the hag’s pale face, was tinged with blood. The grandfather somehow summoned the strength to push the entity off him, and he heard her land on the floor at the side of the bed before she let out an ear-piercing scream. Moments later, the door flew open, and Jeffrey’s son and nephew came into the room.

The light was switched on, and Jeffrey was stumbling forward from the bed with blood streaming from his mouth. He gave a garbled account of the old woman who had pulled his tooth out, but Jeffrey’s son could see that the tooth in question was still there, although it was loose and looked ready to fall out. Jeffrey gargled with mouthwash, took an aspirin, and then swigged two glasses of neat whiskey to deaden the pain from his dislodged tooth.

He laughed about the ‘strange nightmare’ – for that’s what his son convinced him the apparently-real incident was, and within the hour, Jeffrey was once again in the guest bedroom, sinking into sleep, full of fine whiskey and aspirin. Around a quarter-past five that morning, the old hag returned.

Jeffrey felt the alarmingly familiar icy hand on his chest, steadying him as the bony cold finger and thumb of the other hand seized the grandfather’s loose tooth – and this time, wrenched it out in one go.

Jeffrey cried out in pain. The aspirin and the whiskey had only fractionally dulled the agony of such a brutal extraction. The creepy old woman was surprisingly sprightly for her advanced age, and like a flash, she flitted in a heartbeat into the darkness of the room, but Jeffrey could hear her sniggering close by. He let out a scream that over-strained his vocal cords, leaving him unable to cry out again.

Moments later, the door flew open, and in came Jeffrey’s 18-year-old grand-daughter Kerry came in, switched on the light, and hurried to her distressed grand-dad, who was getting up off the bed with his hand to his mouth.

He tried to tell Kerry what had happened, but for some strange reason, the girl was trembling, and started pulling Jeffrey towards the door with so much force, he almost fell over. Kerry was met by other members of the family as she reached the doorway, and slammed the door of the guest bedroom behind her and then told them all. ‘She’s still in there! I saw her.’

Kerry’s father gave a quizzical look and went to open the door, but Kerry got in the way and said, ‘No, don’t Dad! She’s horrible!’

Kerry’s father (who was Jeffrey’s son) opened the door anyway, and made a search of the room. He could find no old intruder, dressed in a long black robe, as Kerry had described her, but there was a sickly sweet smell in the air that lingered in that room for days.

Kerry said that as she had entered the room that morning after hearing her grandfather cry out, she had seen a scary-looking old woman of about only five-feet in height, in a long black robe, hiding between the wardrobe and a bookcase.

Kerry had pretended not to see the old woman at first, but as she helped her grandfather out the room and glanced back, the old woman realized she had been spotted and screwed up her face in a grotesque way that gave Kerry nightmares for years. As in other cases of this sort that I have researched, the grandfather’s tooth was never found. Incidentally, Old Hag Syndrome incidents are currently on the increase across this region – sleep well tonight…

Ex-CIA officer on UFOs: There’s a whole other reality that surrounds us