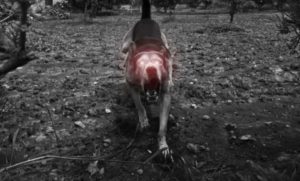 Set in extensive grounds at the junction of Toothill Lane and Huddersfield Road, a building was first recorded at Toothill Hall in the 16th Century and the Toothill family as early as the 1300s.

The name of the area derives from the Old English for “look-out hill”, suggesting human activity had existed there since before the Norman Conquest. It certainly makes a fine site for a watch post, commanding extensive views up and down the lower Calder valley.

Although it seems likely that the Toothill family were the founders of the Hall, it has been occupied by a diverse succession of people over the centuries and the current edifice was constructed by Quaker philanthropist Thomas Firth in 1823 and later, divided into two in 1957.

In Legends and Traditions of Huddersfield and Its District, Philip Ahier recounts a curious legend associated with Toothill Hall and the surrounding area. He was told that during the English Civil Wars, it was home to a young cavalier who was in love with a daughter of Newhouse Hall, located just over a mile away on the other side of Felgreave Wood at Sheepridge.

This girl, Sybil Brooke, was held to be a great beauty and had many suitors in the locality, but only the cavalier of Toothill found his affections reciprocated. However, her father did not approve of the match, despite also supporting the Royalist cause in the Civil Wars, and so forbade the lovers from meeting, confining his daughter to the Hall.

Nonetheless, the young cavalier was determined and devised a means by which he and his beau could communicate still. He would attach a message to the neck of his hound, who then sped through the woods by moonlight to be met by Sybil at the kitchen window of Newhouse Hall.

The girl would then send him back to his master with a message in return. This method proved successful for a period of time, but one fateful night the hound discovered not Sybil Brooke at the kitchen window, but her enraged father.

Such was his anger, he took his sword and with a single blow, cleaved the dog’s head from its body, slicing the letter it carried in two in the process. The hound then turned tail and scampered headless through the woods.

Upon hearing of the fate of his faithful messenger, the Toothill cavalier is supposed to have been so incensed that he changed sides in the Civil Wars, swearing his allegiance to Oliver Cromwell and the Parliamentarians, just to spite the Newhouse patriarch.

Meanwhile, on moonlit nights in autumn, the apparition of a headless hound is still said to roam through Felgrave Wood and back to Toothill Hall. Anybody who witnesses this phantom is supposed to suffer grave misfortune.

This aspect of the legend has much in common with the widespread “black dog” motif in English folklore, known variously as black shuck, barguest, guytrash and skriker. Hence, it may be that the story was grafted on to explain a much older folkloric tradition in the area.

A variation on the legend appears in the mid-19th Century, when a phantom dog with the head and beard of a man was believed to haunt Felgreave Wood (today bisected by the A641 between Bradley Bar and Huddersfield).

A woman named Elizabeth Haigh is reported to have fallen into a deep swoon upon witnessing the monstrosity and was not found until the following morning. Ahier suggests that the origin of this adaptation may lie in Felgreave Wood’s reputation at the time for plentiful game, especially pheasant and hare.

The gamekeepers probably traded on the existing legend to deter poachers, and to reinforce it further may have taken to donning furs and crawling on all fours through the undergrowth.

Although Newhouse Hall lies firmly within Kirklees and the Colne Valley and so beyond the remit of this site, due to its connection with the Toothill legend it seems worth recounting here that the Hall also has its fair share of ghosts.

Following the brutal intervention of her father, tradition claims that Sybil Brooke lost her reason and pined away in the upper rooms of the house, which her ghost still stalks to this day.

Maids in the 19th Century claimed to hear the rustle of silk along the corridors at night and one often complained of being “clutched by an unseen hand”. Meanwhile, in one particular bed in an upper chamber, guests were often disturbed by a thing that crouched heavily on the legs of the sleeper, only to disappear as soon as a light was kindled.