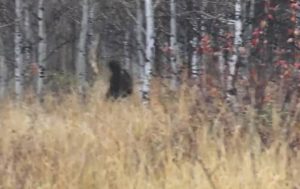 This hunter, unfortunately, did not indicate where and when he filmed this video, although he provided some other details.

According to the man, while visiting a wooded area in preparation for the upcoming hunting season, he noticed “something moving” in the distance, and then the creature suddenly “dived into the bushes.”

As he approached the creature, he began filming it with his smartphone. The creature at that moment just came out of the tall grass and began to go deeper into the forest.

As you can see in the video below, the hunter’s vantage point allowed him to get a pretty good look at the alleged Bigfoot, and you can hear characteristic sounds, as if large branches were breaking under the heavy weight of the creature.

Although the hunter said that he was frightened by what he saw, he tried to chase this creature in the forest, but simply could not catch up with him, the Bigfoot moved surprisingly fast for a bipedal creature and quickly disappeared into the forest.

The hunter also indicated that this is not the first time he sees a yeti and has already observed a similar creature when he was younger. But then he was not sure what he saw, and a new meeting “so close” showed him that what he saw was definitely not a bear or a man in a suit.

Of course, in light of the lack of information about the time and place of the sightings, the hunter’s claims can be met with rather skepticism and his video recording may well be an elaborate hoax involving a man dressed as Bigfoot.

Unfortunately, even though the video is of decent quality (for a recording like this), it only shows a striding dark hairy figure with no discernible face or hands, leaving the notorious costume hypothesis open.

However, the video may also be genuine and should not be brushed aside. Maybe this is one of the best videos because of how close the eyewitness managed to get close to such a creature.