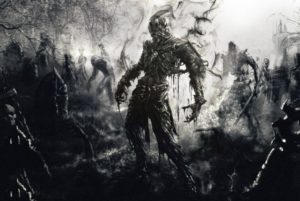 Something dark visited the village Bystrá nad Jizerou in the Semily District in the north Czech Republic in 2007 – something that still terrifies Lucie Gore.

“My parents, my son and me were spending some time at our weekend house,” she said. “The house is about 150 years old. It used to be a pub.”

As Gore’s son slept in an upstairs bedroom, Gore and her parents sat relaxing in the downstairs living room when she saw something that couldn’t be – there were people in the room; people her parents couldn’t see. Gore thought them an army.

“In the evening, about 9 p.m., I had a vision,” she said. “I saw one or two leaders, the normal height of a man, not too tall, about five to six feet tall. I understood they were the leaders of this army of small little figures.”

These two beings, both hooded, stood in front of Gore, ignoring her and motioning orders to the entities behind them – tiny entities.

“This army was standing, lined up and waiting for a command from the leaders,” she said. “There were 10s and 10s of them. They were somewhere between one to two feet tall. The army was small, like midgets.”

Gore could do nothing but sit in the living room, staring gap-jawed at these diminutive, hooded beings forming ranks before her. But the encounter quickly turned wicked.

“They didn’t do anything,” she said. “They just stood there and with that vision I had a sharp feeling inside of my body that someone was killing me. I really thought that I was dying suddenly right there, surrounded by my family.”

“I felt the worst fear and badness,” she said. “I had a real evil feeling from them.”

She sat, staring at the army of small entities and their commanders, until something snapped within her and the beings were gone. Her first thought was of her child.

“When I ‘got back’ and was able to walk, I went upstairs to check on my son,” she said. “I was worried about him. I was thinking that there might be something wrong with him.”

The boy lay in bed sleeping peacefully. Gore was relieved, but hesitant.

“I didn’t get close to him, because I didn’t want to put this evil feeling around him,” she said. “I didn’t know what to think at all.”

But she did know one thing – she wasn’t going to talk about this incident.

“The experience was very frightening and I never wanted to talk about this with anyone else,” she said. “I feel that they wouldn’t understand anyway and I would look like a total freak. Also, I don’t want to think about this because it’s too scary.”

Gore wouldn’t tell her parents, even though this event occurred in their house.

“They are atheists and they would say that I am going crazy and would make me go see a doctor,” she said. “I believe in God, respect nature and I am interested in new age science. I’ve never experienced anything similar to that before or after.”

She eventually told her husband from Louisiana, and a Catholic friend.

Gore knows of a similar incident to hers, but she doesn’t want to know more about it.

“I have heard about one more lady here in the Czech Republic that saw them too, but I never investigated it,” she said. “I didn’t want to. I think it definitely changed my life and the way I think.”

What is Déjà Vu? Theories Regarding Unexpected Familiarity