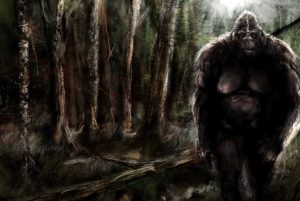 These unique recordings of what is believed to be Bigfoot were captured by Al Berry and Ron Morehead at a Sierra Nevada camp in California, 1972 (Berry) and 1974 (Morehead).

Analyses of these recordings were conducted by the University of Wyoming, and by a retired military Crypto-Linguist.

A former Naval specialist in linguistics and audio spent several months analyzing the entirety of the Sierra sounds. He remarked that when he first heard the sounds, he was able to tell that they were not human and that they weren’t faked using technology. He also determined that the patterns of the sounds were an actual language, not just animal sounds.

According to bigfootbase.com, in 1971, Ron Morehead worked as a hospitality manager and church board administrator in Merced, CA. One fateful week, Ron learned that a family friend & fellow church board member was two days late returning from a high-Sierras hunting trip.

The man’s wife explained to Ron that his hunting troupe encountered mysterious creatures that made “horrific, intimidating sounds and left five-toed prints around their camp.” One of the men even fled the site in terror.

A known explorer/adventurer and trusted friend, the man asked Ron to return with him to the area and collect evidence. Soon thereafter Ron trekked into the wilderness with a small group that included the hunter-friend and Sacramento journalist Alan Berry. The first trip yielded no results other than fragments of perceived toe prints in sand. The follow-up adventure was much more eventful.

On this trip, once they reached the remote deer-hunters camp, it didn’t take long for the mysterious beings to arrive from a nearby ridgetop.

Though they evaded sight stealthily, the creatures whistled, screamed, and vocalized towards the men several times. After the invaders faded into the night, Berry and his companions found large bare-foot prints in the snow and pine.

For the next year or so, Ron, Alan, and friends returned to the site with microphones, tape cassette recorders, and plaster of Paris for foot-casts.

Bigfoot (also known as Sasquatch) is the name given to a cryptid simian-, ape-, or hominid-like creature that is said to inhabit forests, mainly in the Pacific Northwest region of North America. Bigfoot is usually described as a large, hairy, bipedal humanoid. The term sasquatch is an Anglicized derivative of the Halkomelem word sásq’ets.

Scientists discount the existence of Bigfoot and consider it to be a combination of folklore, misidentification, and hoax, rather than a living animal, because of the lack of physical evidence and the large numbers of creatures that would be necessary to maintain a breeding population.

Scientists Grover Krantz and Jeffrey Meldrum have focused research on the alleged creature for the greater parts of their careers.