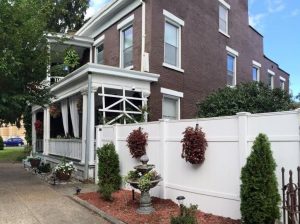 Michele Bell, 56, has put up the haunted mansion for sale. It has been owned by her family for six generations, reports timesunion.com.

The woman says the reason for the sale is that the house brings her too many sad memories of her mother, who suffered from Alzheimer’s disease. Michelle looked after her for nine years.

The woman told that ghosts live in a huge house. There are the spirits of not only the woman’s relatives, but also the lodger, who was found dead in the basement of the house.

Michelle also claims to have seen three men whom she does not know. The strange mansion has been known for a long time, even outside the state. A house was regularly visited by numerous experts who study the paranormal.

The mansion has been filmed and featured in shows on Discover ID and TLC (The Learning Channel).

“I would like it to go to a young couple,” said Bell, envisioning them as perhaps opening a bistro but always appreciating its history and spiritual side.

Bell has listed the house at an asking price of $444,444 — a spiritual number that she said she doesn’t plan to change.

The woman also said that when she sleeps in the house, she constantly hears screams or loud rustling. Thrill seekers rent one of the bedrooms for the night to get their adrenaline rush.

“Don’t worry, our ghosts are harmless; you probably won’t see them, although some visitors swear they exists!” reads her AirBnB listing of a queen bedroom for rent in the house, which joined with the use of the house’s common areas, currently rents for $206 a night.

The two-story home located at 562 Fifth Ave. apart from its neighbors in the city’s Lansingburgh neighborhood.