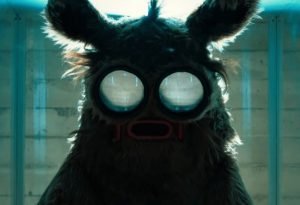 The word “pooka” is an Irish word meaning “spirit” or “ghost”, but it is most commonly used in association with a particular type of fairy that can assume various forms, including a horse, goat, dog, rabbit, and even a goblin.

No matter which form the pooka assumes, its fur or hair is almost always dark or black in color. Perhaps the most common guise that the pooka assumes is that of a wild black horse with sulfur-yellow eyes, a long mane, and chains draped about its body.

According to legend, these ominous horses would primarily conduct their mischievous activities after dark, wreaking havoc on small villages and remote farms across the Irish countryside by destroying crops, breaking down fences, and terrorizing livestock.

The origin of the word “pooka” has been the subject of much debate among etymologists. Some believe that it was derived from the Old Norse word “pook” or “puki”, meaning “nature spirit”. Others contend that it is an adaptation of the old Irish term “poc”, which means a “male goat”, but carries reference to early Celtic horse cults.

Many of these cults would meet on high mountaintops, a locale considered to be the traditional dwelling place of these “nightmare steeds”. Some legends claim that these mysterious horses are able to speak with a human voice, offering warnings and even prophecies where appropriate.

Many modern-day locations in Ireland are named after these early legends; for example, Binlaughlin Mountain in Fermanagh is referred to as the “peak of the speaking horse”.

Pookas are known for being bringers of either good or bad fortune, depending upon which particular fairy you encounter. Legends of encounters with these fairies range from pleasant to terrifying.

One of the most noteworthy legends refers to reports of pookas stopping in front of certain houses and calling out the name(s) of people that it wishes to take for a midnight ride.

Once a person would agree to go for a ride on the pooka, it would subsequently throw them off its back into a mud hole or a ditch. If the person refused to go for a ride, the horse would then vandalize their property, further demonstrating its mischievous and vindictive nature.

As mentioned earlier, the pooka is an agile shapeshifter, and legends of its exploits when in other forms illustrate its more benevolent side. Famous Irish poet Lady Wilde relates the tale of a “phouka” that took the form of a young bull.

In Wilde’s story, the phouka secretly aids a farmer’s son with milling corn into flour, ultimately making the farmer very wealthy. If a pooka takes the form of a rabbit, it will most likely be helpful, wise and even humorous.

One of the most famous examples of this is the classic movie “Harvey” (based on the classic Mary Chase play), a film starring Jimmy Stewart in which the title character is a six-foot-tall white pooka rabbit that becomes Stewart’s daily companion.

The 2001 film “Donnie Darko” portrays a pooka rabbit that entices lead actor Johnny Depp into all kinds of mischief, alternately producing both good and disastrous results in the lives of the people around him. Overall, though, the pooka in its other animal forms (aside from the horse) is usually considered to be more friendly and beneficent.

The pooka is central to certain Celtic agricultural traditions, the most famous being the harvest festival known as Samhain. This festival takes place in the first week of November, and it is celebrated to signify the gathering of the last part of the crops.

Whatever crops remained untouched in the fields were considered to be “puka”, or “blasted by a fairy”, giving reference to a common legend that the pooka would roam the fields at the beginning of November and spit or defecate upon certain portions of the crops, thus rendering them inedible. The pooka in these instances is usually seen as a small, hairy, deformed goblin.

Even today, reapers in certain regions will leave a small share of their harvest crops untouched in the field, offering them as the “puca’s share” to satisfy the creature’s mischievous appetite.

Several different superstitions and legends regarding the pooka still abound in Ireland to this day. Some have even painted the pooka as a friendly neighbor that will stop and have a friendly chat with you, and then vanish into thin air without saying goodbye.

Depending upon which region of Ireland you visit, you will come across many different kinds of fun and inspiring tales regarding the pooka, ultimately showing that this legend has left an indelible mark on the entire country.